Since the onset of the pandemic, US stimulus measures have been immense, with fiscal support totalling ~$6 trillion (almost ~30% of 2020 GDP). Most recently enacted was the $1.9 trillion America Rescue Plan, signed into law by President Biden on March 11, 2021. Much of President Biden’s first 100 days in office has been largely focused on reviving the economy and ramping up vaccination efforts. With both successfully underway, Biden’s next proposal centres on a $2.3 trillion infrastructure package (American Jobs Plan) and an expected ~$1 trillion for family aid and education (America Families Plan). With national debt levels already at all-time highs – how does Biden plan to pay for it? Two words: Tax hikes.

During President Trump’s term, the Tax Cuts and Jobs Act of 2017 was introduced (largest overhaul of the tax code in three decades), which led to a temporary reduction of individual tax rates and dropped the corporate tax rate to 21% (from 35%). While the act was far from perfect (tax experts argue that a large part of the tax giveaway will flow to the 1%) and failed to supercharge the economy, the interim effect of reduced taxes on the middle class played a role in driving economic growth and led to low unemployment levels prior to the pandemic.

Furthermore, equity market returns rose from 2017 – 2019, with large cap stocks reaping the largest benefit from reduced taxes. US corporates repatriated over $1 trillion of overseas profits, which supported USD strength and led to large capital inflows. Similarly, the last one-time tax cut for repatriations (back in 2004) saw a 13% increase in the dollar, against a basket of majors.

Biden’s planned tax increase to finance the forthcoming proposals is underway and hence a part of the 2017 tax cuts implemented by the former President will be repealed. The current administration’s focus is on taxing the wealthiest individuals (top 0.3%) and adjusting the corporate tax regime by hiking rates to 28%, while removing incentives for corporates to set up shop and send profits offshore. Overall, Janet Yellen estimates the tax plan to generate ~$2.5 trillion over a 15-year period, potentially funding the entire infrastructure bill.

Thus far, the initial market reaction on Biden’s tax plan has been a pull back in equity markets. The S&P 500 index posted its largest daily decline in over a month upon Biden’s proposal to almost double the capital gains tax rate for those individuals earning over $1 million. Republicans will no doubt push back on the initial proposal (resulting in perhaps a lower tax increase), however concerned individual investors could look to sell off shares to secure current tax rates.

Equities that previously benefited the most from Trump’s tax reform are facing downward pressures, inherently highlighting the prevalent risks in the market from additional tax reform. Despite the continued bull market run, there is a fair bit of sector rotation within the equity markets, with beneficiaries of recent tax reform in the healthcare, pharma and consumer discretionary sector losing steam as the prospect of higher corporate tax rates materializes.

The broader risk sentiment turned slightly negative this week, over fears that higher taxes could hamper the steady recovery seen in markets. US treasury yields, which have stalled in recent weeks, moved higher on the day as the 10-year yield slid ~5bps to 1.54% upon the news of Biden’s tax proposal on America’s wealthiest. On the back of falling yields, the dollar extended its decline against major currency pairs with the trade weighted USD index (DXY) closing out the week with new monthly lows (see Chart 1). 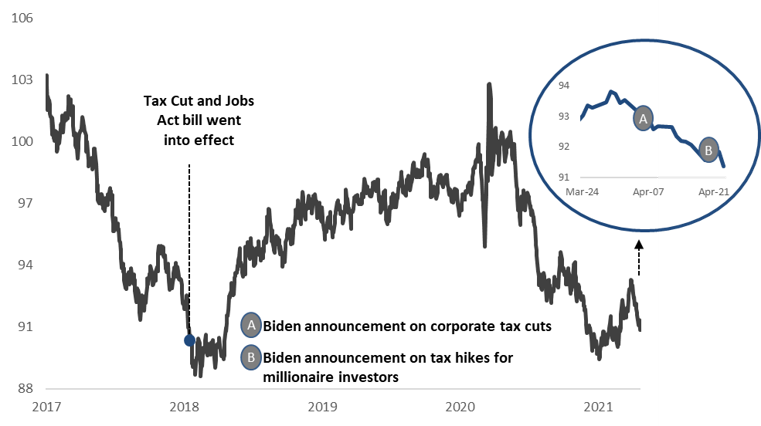 Whether this shift in tone is expected to persist remains to be seen – the last major tax reform under the Trump administration was followed by a period of strengthening USD (see Chart 1) up until the start of the pandemic crisis in 2020. The USD could face pressure following a part reversal in tax policies, however its important to note that the US economy remains far ahead on the global scale in terms of its recovery. We touched on the US’s economic outperformance and increased risk of higher inflation and nominal rates in last week’s article. If corporate tax rates are raised however, the impact could result in a 4% decline in earnings per share for the S&P 500 (according to JP Morgan estimates). This may lead to more of a choppy market as opposed to the current steady growth cycle.

As Biden continues to push forward on tax reform at the individual and corporate level, it is essential to understand the risks and how they weigh into the broader market. Part of the risk is already reflected in market action, as seen by recent equity declines, sector rotation and declining yields. However, with Democrats holding a thin majority in the US house and Senate, investors are also weary that the proposed reform will face hurdles. Hence, as negotiations progress, be cognizant of risk that is yet to be priced in, as this could spur significant volatility if sell offs emerge.