A turning point for the dollar?

Can the FX and Rates markets both be right?

During the first three months of 2021, we saw the yield on the US 10-year Treasury Bond rally from 91 to 174 basis points. Unsurprisingly, this coincided with a rally in the dollar index (DXY) from 89.2 to 93.4 (see green arrow in the chart below) and followed the conventional wisdom that a rise in interest rates typically results in a stronger currency. This also tied in nicely with the reflation narrative and expectation that the Federal Reserve would be forced to combat rising inflationary pressures with tighter monetary policy to prevent the economy from overheating. 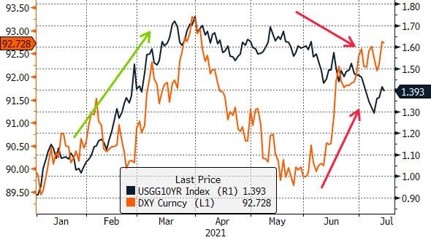 Following a period of consolidation throughout April and May, (where the 10-year yield hovered around 160 bps), we saw long- term borrowing costs start to tumble in June As can be seen in the above chart, the relationship between the 10-year yield and DXY between April and May weakened and since June, the two have moved in opposing directions (shown by the red arrows). Last week, the 10-year yield touched 128 basis points and although we’re back at 136 bps at the time of writing, we’re still considerably lower than where we were a little over two months ago. What is also interesting, is the lack of reaction in the FX markets. Based on what we saw in Q1, it would have been intuitive to have envisaged a fall in the dollar versus its major counterparts, but instead both GBPUSD and EURUSD have been relatively flat.

So, what’s going on? Are we simply seeing a short-term breakdown in correlations or is this the beginning of a more systematic shift?

One explanation for lower rates and a stronger dollar is that the current bullish economic sentiment is beginning to wane and markets are returning to risk-off mode. This is not beyond the realms of possibility – there is already a huge element of optimism priced in on the back of vaccine success and signs of economic recovery that may fail to materialise. However, if this were the case, one would expect equity markets to be lower and certainly not making any new record highs.

A second justification could be that the strong dollar and buoyant equity markets are both warranted on the back of expectations for a strong US economic recovery, but bond markets are cautious about the risk of the Fed implementing yield curve control. This would fit in neatly with our market melt-up scenario that we set out at the start of the year.

A third conclusion is simply that the bond market got ahead of itself earlier this year and we are now witnessing a correction. Three months ago, there was a huge amount of talk about the risks of inflation spiralling out of control with comparisons being drawn of the 1980’s. To date, the Fed remains of the view that the recent spike in prices will be transitionary and not sustained over the medium / long term.

Either way, what is clear is that this move in the bond markets came in the wake of a suggestion from the Federal Reserve that the committee could start to raise the Fed Funds rate sooner than expected. Although a dip in long-term yields would be counterintuitive, the Fed has simply succeeded in flattening the curve and the final destination remains broadly unchanged. The thinking here is that by raising rates in the short term, it lessens the need for tighter policy longer-term.

Ultimately, the question about whether inflation will be transitionary or whether it’s here to stay remains unanswered but Tuesday’s US CPI print, +5.4% y/y – the highest reading since 2008, suggested the latter is looking increasingly likely. Had the increase been solely as a result of a rise in food and energy prices, the transitionary argument would have merit. However, with core inflation running at +4.5% - the highest since 1991, it seems unlikely that base effects will fall away in a year’s time. The other point to note is that we are now seeing a rise in the consensus forecasts for inflation in 2022 as well as 2021 – a clear signal that the market is losing faith in the transitionary narrative.

For now, our bias remains unchanged. While expectations of higher nominal rates may offer the dollar some support in the near term, we continue to expect the dollar to suffer from lower real rates in the longer term.