Stagflation – Nitroglycerin for the FX Market?

Two and a Half Centuries of (Real) Interest Rates

As market participants put Jackson Hole behind them and celebrate Chair Powell’s conciliatory speech, by driving of equity markets to new all-time highs, the key question is whether the observed inflation is transitory as viewed by Chair Powell. We are at a crucial decision point, with two paths ahead: A) continued accommodative policy in the face of rising inflation which, if proves not to be transitory, may lead to untamed inflation, and B) reducing accommodative policy which encompasses the risk of torpedoing the economic recovery.

In low interest rate regimes, such as what we witness today, higher inflation can mean negative real interest rates (RR). With 10-year US Treasuries presently at 1.30% and 10-year inflation expectations of 2.4%, the owner of a 10-year bond would expect their investment to “erode” (in terms of purchasing power) by 1.1% per year.

Negative RR have a wide range of consequences, among others: as bonds become less attractive, savers are de-incentivized and the search for returns will direct inflows into riskier assets of all types, lifting their prices, some would argue, way past their fair valuation. Other consequences might not be known yet.

When facing unusual circumstances, it is worthwhile looking at the past for lessons and pointers. Here, we take a closer look at US inflation and interest rates since 1786, shortly after independence, using the impressive historical data gathered Paul Schmelzing from the Bank of England. [1] 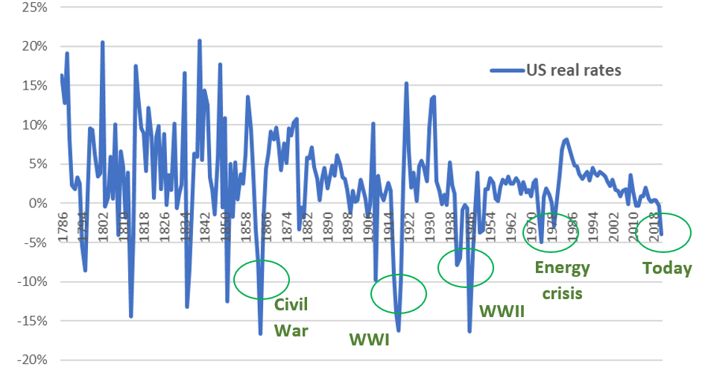 No doubt, the world has massively changed in the last two and a half centuries: the gold standard is way behind us, and modern central banking is still rather emergent (the Fed was only founded in 1913). Nonetheless, it is worth looking back, as human behavior and the fundamentals of debt retain important similarities through the times.

Periods of negative real rates are far from uncommon, but usually have not lasted long

US real rates have been in negative territory nearly a fifth of time since 1786. However, most of these episodes lasted no longer than two years, except for the period around WWII (1941-1947). Interestingly, this period is the only other time when the Fed had a long-term rate management policy, as the US Government was issuing debt to finance the war effort.

This observation is particularly salient and policy makers would be well advised to investigate it. In particular, RR went negative during the American Civil War and both World Wars, driven by higher inflation – due to scarcity of supply given the war effort - as nominal rates remained relatively unchanged.

More recently, the 1970s drop in RR was also driven by strong inflation given the rise of energy prices due to OPEC action.

It is quite interesting to note that today’s higher inflation is also driven, similar to these war related episodes - albeit a pandemic is not a war - by the disruption of supply chains and production, transportation challenges, and higher commodity prices.

A negative RR environment is not a healthy setting for capital markets or the economy at large; the value of money erodes and drives economic agents to decisions that either increase risk and leverage in the system or affect societies negatively via increases in income inequality and poverty.

Historically, these episodes have ended either because the drivers of inflation “faded” naturally (wars ended, supply shocks dissipated) or because central banks drastically changed their policy approach, for example, the post WWII agreement between the Fed & Treasury, or the legendary rate hikes under Paul Volker.

Fed Chair Powell is clearly in the “inflation will fade” camp. However, in our view, the Fed’s unprecedented accommodative policy also plays a key role in where we are today. The answer might not lie in one (inflation is transitory) or the other (tapering) but a bit of both. By this we mean that part of the inflation might in fact be transitory and fade, but some inflation of it is likely structural and will stay. For instance, due to widespread adopting of ESG efforts and the effects of climate change on agriculture, among others. So, the most optimal path would be a calibrated adjustment to monetary policy to address the non-transitory part of inflation. If the Fed fails to take this more nuanced approach the consequences can be dire for risk assets and the economy at large.