The Convexity of Omicron

Will the BoE end sterling’s party?

Should he stay or should he go: Market impact if Boris Johnson holds on or resigns as Prime Minister

The last month has been chaotic for Boris Johnson and his government – scandal after scandal has been leaked to the press. Most recently they centred around Number 10 parties taking place when the rest of the country was locked down. Cue a volley of calls for Boris’ resignation – opposition parties, remainers, severe lockdowners and anti-lockdowners all have their reasons for wanting Boris to step down, and now seems a perfect opportunity to go in for the kill.

So far, market reaction to the Tory scandals has been muted and we’ve remained focussed on the more pressing issues of inflation and central bank action. This can change quickly and if it does, headlines from Whitehall will begin to have serious impacts on markets and hedging strategies. With that in mind, we wanted to look at just three potential scenarios.

The likely case is that Boris is going nowhere, he’s a specialist at turning gaffs into selling points. From his time in the media, to his time as Mayor of London, to his spearheading of the Leave campaign – he rises, more popular than ever, from mistakes which would prove fatal for other politicians. This event, right now, feels more emotive (for good reason) but he has good will stored up from avoiding winter restrictions when other Home Nations locked down – if he can bring focus back to his recent wins, he may win back the public and his own party.

To remain confident in this outcome we need to keep an eye on his popularity in the party. Before the next mandated general election in 2024, it is only his own party that can truly topple Boris. The letters required to spark a no confidence vote are sent in secret and their numbers (54 are required) are not published. Without this, we ought to keep an eye on polls amongst Conservative party membership – most importantly, whether he can lead them to victory next time around, and currently it looks like the party still believes he is the man to lead.

In this scenario, market impact should be minimal. Headlines and scandals won’t move interest rates and GBP but leadership challenges and upsets to the status quo may.

Should the Chairman of the 1922 Committee receive the 54 letters of no confidence required to spark a leadership election, the market will have to digest a new leader. The two clear frontrunners are Rishi Sunak and Liz Truss. Rishi has had a meteoric rise during the last couple of years and if there is such thing as a poster boy of the UK Covid era, he’s a good candidate. His willingness to eschew typical Conservative values, in the face of extreme circumstances, and extend furlough to those most effected by Covid has won him popular support – even if some would argue it wasn’t the most strenuous of political tasks. Liz Truss is a typical Conservative – favouring low taxes, low regulation – she is to many the second coming of Margaret Thatcher.

As stated above, this is a difficult outcome to track but we have some experience. The last time a leadership challenge was mounted was in 2019 and leading up to the challenge there was a sudden increase in Google searches for the Chairman of the 1922 Committee, Sir Graham Brady. If headlines continue against Boris, this is certainly an indicator to watch closely.

Though on paper both candidates look fairly markets friendly, they lack experience. The markets have a strong preference towards the devil it knows – inexperience and unfamiliarity will breed nerves and we can expect increased volatility in UK assets, rates, and FX.

If a new Tory leader was elected there would be pressure from the opposition to call an election – the Tory majority means that there is no need for an election until 2024, and any party member watching recent polling should not be in a rush to call one. That said, as former Prime Minister Gordon Brown learnt, public opinion doesn’t always improve and a non-election winning PM has an increasingly tenuous claim to a mandate as time passes.

Market participants will be keeping a close eye on polls around public voting intentions, which currently sits in Labour’s favour by the widest margin in almost a decade. A general election will greatly heighten nerves in GBP markets – especially if a Labour victory looks likely. Labour have typically been less market friendly than the Tories (to put it mildly). Even though Jeremy Corbyn and mass nationalisations seem a thing of the past, the shadow cabinet has members who identify as socialist and staunch remainers, both stances are firm deviations from the sitting government and the impact to GBP assets will be unknown. Hedgers can expect a marked increase in volatility and significant weakness across GBP assets should Labour win, at least in the short term.

Figure 3: Labour is polling better than it has for almost 10 years 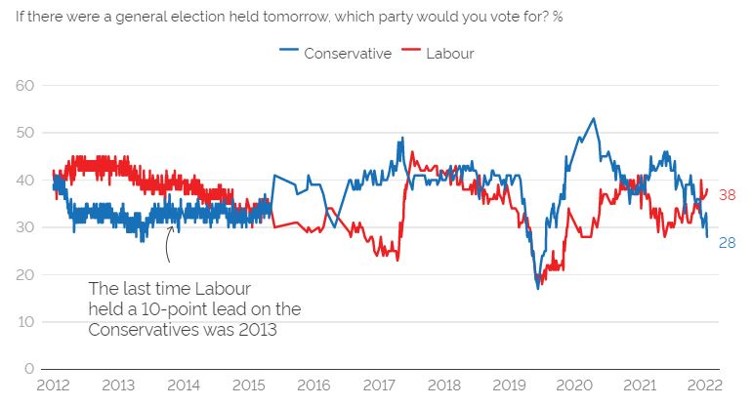 For now, the market (and public!) awaits the findings of Sue Gray’s inquiry – rumours have it that Sir Graham Brady currently has more than 30 letters of no-confidence. With several MPs waiting for this report before deciding, the pace of change in Whitehall could take leap forward in the next few days.