Carry On My Wayward Fed

It’s no surprise that rates have been on the move lately as investors digest geopolitical risks, record CPI prints, and constantly shifting central bank rhetoric. In fact, the Bank of America’s MOVE index, which measures implied volatility of the US yield curve, has spiked to its highest level since March 2020. This in turn has driven an increase in the currency volatility measured by JPMorgan’s Global FX Volatility Index, with domestic real rates being a key macroeconomic driver of a country’s currency. However, the typically quiet FX forward market, based largely on interest rate differentials between two countries, has also seen notable activity. Depending on direction and base currency, this may be a good time to consider the upcoming risks to changes in the forward curve shape and capture the carry before it’s gone.

As the first central banks broke rank and considered reining-in COVID-induced monetary largess - the likes of the Bank of Canada, Norges Bank and Royal Bank of New Zealand started to reduce balance sheet growth and saw the front-end of their respective yield curves start to rise. As a higher yielding currency, this meant better carry dynamics for local investors in the countries hedging FX their exposure. The Bank of England (BOE) was next followed by the Federal Reserve (Fed), which made its big debut at the ‘tightening party’ in late November, when Powell declared it a good time to ‘retire the word transitory’. Amid sizable CPI prints and relatively robust economic performance, front-end rates in the UK and US have since climbed significantly, flattening their respective yield curves.

Finally, Lagarde at the helm of the ECB conceded there is more persistence to the current inflation than expected, prompting a repricing from 30 to 50bps of tightening for the year.

On a relative basis, GBP and USD-based investors are reaping the best improvement in FX carry this year when hedging against G10 exposure, especially the lower yielding EUR, SEK, CHF, DKK, and JPY. Against EUR, GBP receives a 200bps carry benefit for 1-year (a 17-year high!), while the USD receives 170bps. This makes for an excellent time to capture this hedging benefit where possible, whether extending hedge tenors or increasing hedge ratios. The ‘middle group’ of AUD, CAD, NOK and NZD have remained fairly constant relative to each other while also reaping the improved benefit against the lower-yielding currencies (albeit to a lesser extent) and losing ground against GBP and USD. EUR and JPY-based investors may be best placed to try to reduce their carry outlay on a potential future pull-back in foreign yields. 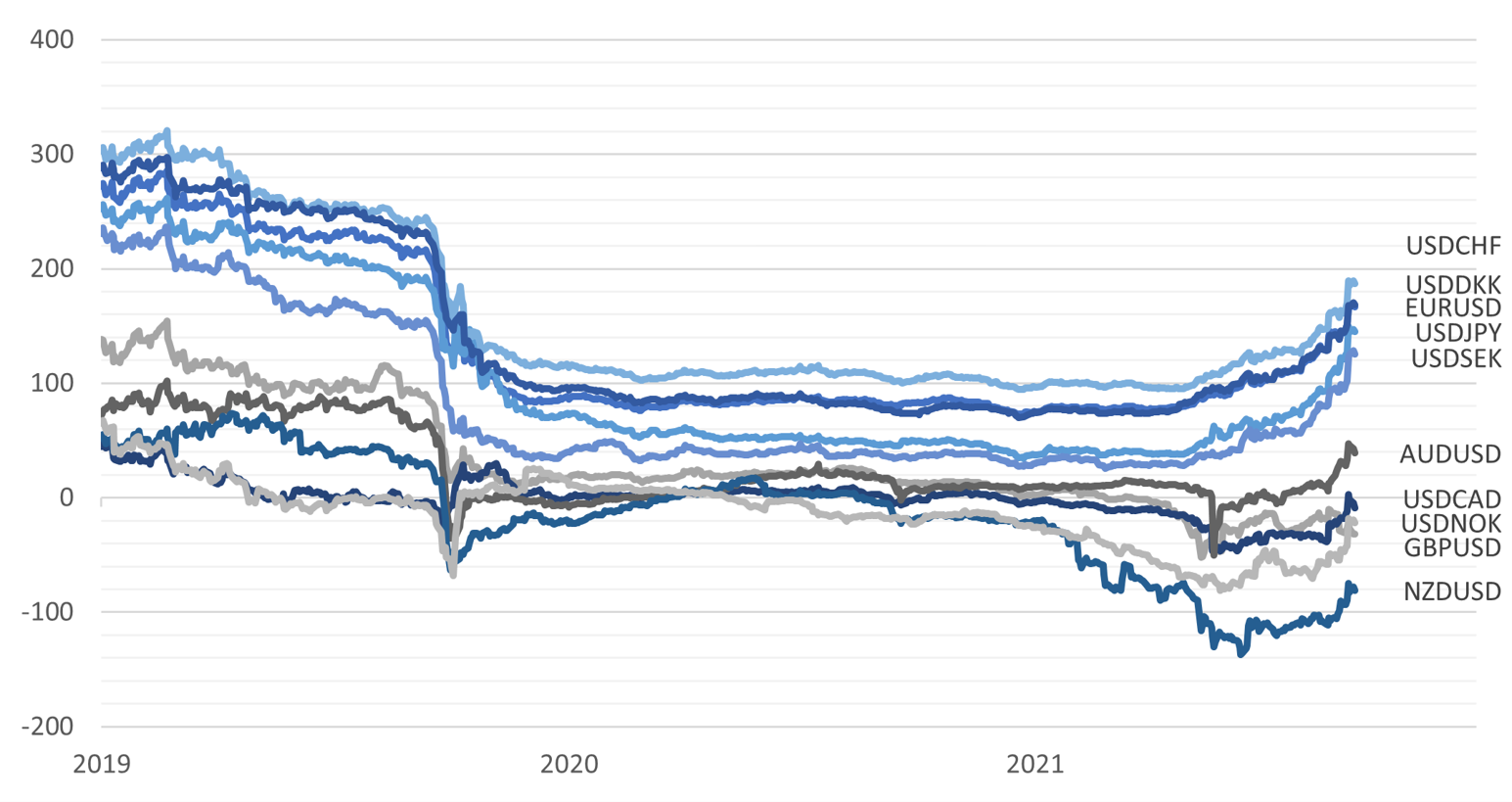 With short-term rates moving so quickly, some market participants are beginning to question the degree of hawkishness priced in from the BOE and Fed. At the start of the year, the market was pricing in 4x 25bps hikes for 2022 by the BOE and 3x 25bps by the Fed. Both are now pricing in 6.5x 25bps, or roughly 1.60% of tightening by December of this year. This has considerably narrowed spreads on front-end rates with those in the belly and far end of the yield curve, with the UK 2-year and 30-year GILT yield spread at only 8bps. Such a flat curve may call into question the effects of the expected rate hikes on sustaining growth and economic performance in the medium term or note that the move up in the front-end is overdone. If CPI figures, still experiencing base-effects YoY, were to pull back from current highs, it is hard to imagine any of these central banks charging forward with continued tightening. Broader cost pressures could be further ameliorated should supply chain dislocations ease, something that has yet to happen but could materialise suddenly.

A few simple principles a good trader may impart are to ‘buy the rumour, sell the news’, to ‘not try to call the top’, and that it is ‘time to consider the other direction when everyone else is in consensus’. A risk manager might just say, ‘hedge!’. In borrowing from both playbooks, there may be good opportunities to capture an overpriced BOE or Fed before expectations are tempered - taking advantage of improved carry benefits while reducing negative FX impact on investment performance.