A Hawkish BoE is not enough

It’s a strange world when a central bank hikes rates months before its peers and continues to consecutively hike rates but the currency weakens over the same period. This is the reality facing Sterling, the BoE started hiking rates last December and the logic would be that higher rates support a stronger currency. Everything is relative in FX, and the BoE would now be judged as tentatively hiking rates by “only” 0.25% at 4 prior meetings and 0.5% at the last meeting in August. The Fed by comparison hiked by 0.25%, 0.5% and twice by 0.75%, a clear aggressive pivot but also a delayed response. But if the Fed was seen as relatively more hawkish than the BoE and that drives GBP weakness, then why is Sterling not stronger against EUR year-to-date given the BoE is more hawkish than the ECB? Both Euro and Sterling have lost almost the same amount of ground against the Dollar this year. UK rates are now predicted to peak higher than in the US, yet Sterling is still under pressure which indicates there is something more fundamental and economic at play here. 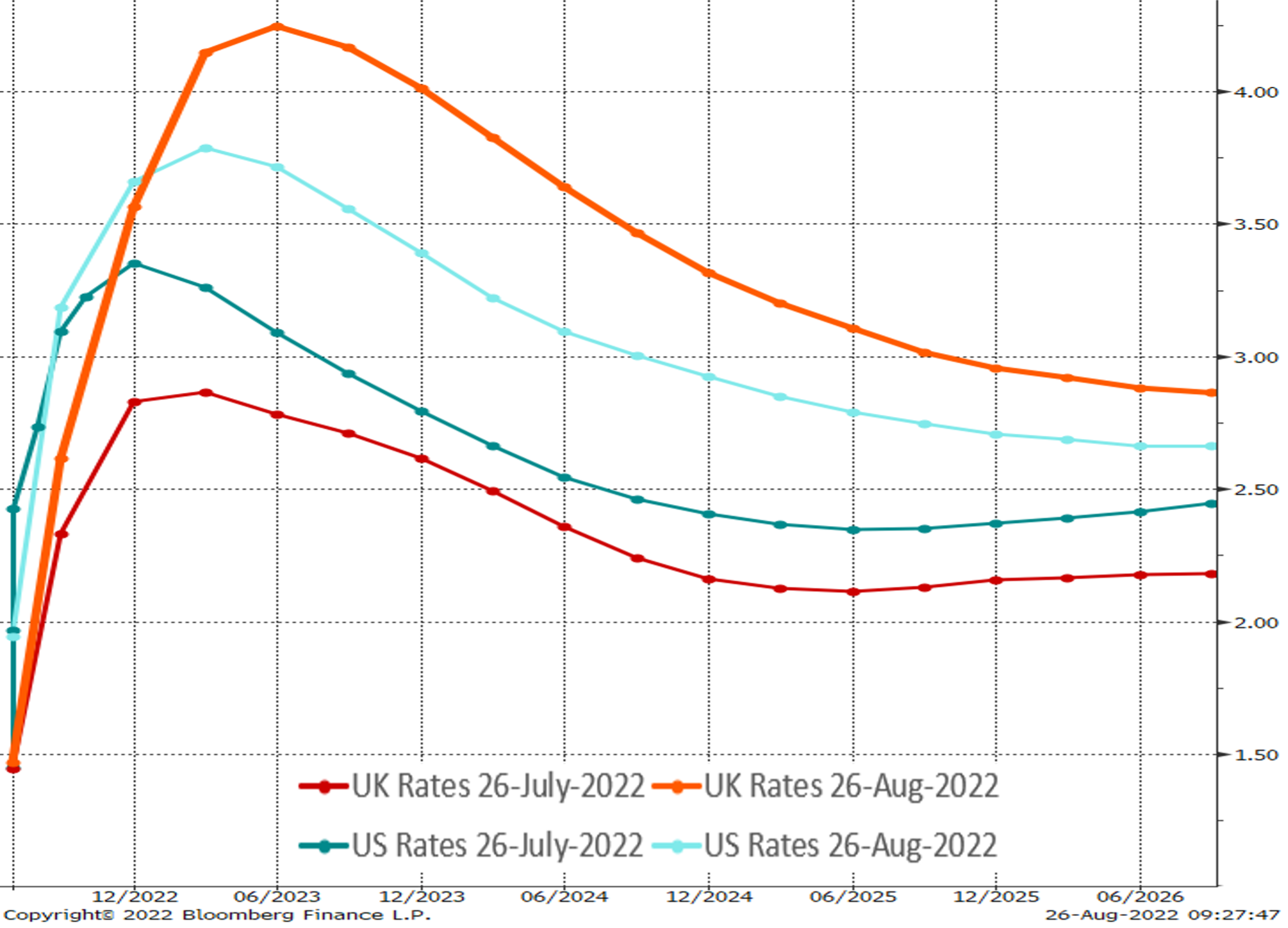 Italy and the EU as a whole. Although this is a quick and dirty comparison, as consumer habits are different across different countries and cultures, given the impact of soaring energy costs and the proximity and implications of the Ukrainian/Russian war, you’d expect European countries to exhibit higher inflation but that’s not the case. One reason for the mismatch is government support in Europe’s biggest countries is easing inflationary pressures. Germany, France, and Italy have provided €60bn, €45bn and €50bn in support measures whereas in the UK the support measures only equate to €29bn. However, there’s a similar theme across Europe which seems to be alleviating inflationary pressures to some degree and ultimately the argument boils down to taking the pain now instead of burdening future generations with debt or increasing support measures now, i.e. fiscal responsibility and a fundamental difference between Rishi and Liz in the Tory leadership battle.

From a longer-term debt perspective, this should weigh more heavily on the Euro, but that’s only part of the picture. Markets are betting that the UK economy will underperform its peers in the G20, with only Russia performing worst according to the OECD forecasts for 2023. The BoE is also forecasting that the UK enters a recession in Q4, which creates a complicated situation if inflation doesn’t begin to show signs of easing before then. Add to this a government in limbo, a Q2 trade deficit which was the largest quarterly deficit since records began, ongoing wage disputes and strikes that hamper productivity and growth and it’s easy to see why UK rates and Sterling have diverged.

A slight positive for Sterling in the short term is that real rates up to 2 years are higher than in Germany and France but thereafter they are lower. All 3 countries exhibit negative real rates across the curve and are considerably lower US rates, another reason why the Dollar is so strongly positioned at the moment. Relatively higher interest rates attract foreign capital and investment which in turn boost the demand for local currency. Real rates are a function of the relationship between nominal rates, i.e., the interest rates we see quoted day to day, and inflation – if nominal rates increase more than inflation or inflation decreases, real rates are higher. So, if we want to see Sterling benefit from higher nominal rates, we need to see rates increase beyond inflation or for inflation to come down. The latter is difficult to control given a large driver is supply side/energy effects, and the former is easier to control but makes a cost-of-living crisis worst and stifles growth. To alleviate a cost-of-living crisis and support growth you need government support which in turn increases demand side inflation but whether the inflationary effect is felt immediately or further down the road is debatable, but you can see the conundrum that’s developing here and the consequences on the UK economy.

Despite all the headlines and mounting evidence, there’s still a chance for Sterling to recover once a new government is installed and credible action can be taken, whether it’ll be enough ahead of a difficult winter, only time will tell but what is certain is the BoE can’t do by itself.