The Autumn of Dangers

They (i.e. markets) continue to function well, and we have not seen the signs of deleveraging of the kind that sometimes occurs in an environment of tighter monetary policy.

Only 24 hours separate these seemingly contradictory evaluations of the liquidity situation in markets delivered by Secretary Yellen. One could argue that in the last few months, decision-makers, politicians and central bankers have generally failed to inspire confidence or present a coherent and thoughtful analysis. This might suggest that they might not have steady hand on monetary and economic policy, let alone being prepared for the variety of complex scenarios that might face the world economy in coming months.

The volte-face of the British Prime Minister over a 2-week period which ended in the “resignation” of her Chancellor of Exchequer, is yet another example of how the foundations of financial stability are being rocked by lack of strong analysis and sounds advice, as well as subpar leadership.

There is a lot of uncertainty around the effects that this very aggressive and tardy hiking cycle will have on the economy. This, combined with a very fluid geopolitical landscape fretted with tensions, make for a very unstable setting as we enter the fall, followed by a potentially challenging winter.

Let us step back to provide some context on the forces at play. In recent years, the norms established following the end of Bretton Woods era and the energy crisis of the early 1970s, have changed:

Where does this leave us this fall and beyond?

Several important risks already exist, and others are finally appearing on the horizon due to the progressive erosion of the global financial and political stability.

A) In Europe, the energy supply situation remains strained and not likely to ease as we approach the enactment of new sanctions by the EU on the Russian oil industry effective Dec 5th. How resilient will populations be this winter?

B) Meanwhile, the Special Petroleum Reserve (SPR) in US have dropped to lows not seen since 1984 and leave little room to manoeuvre in case if a new supply shock.

Chart 1: US Petroleum Reserves at their lowest since 1984 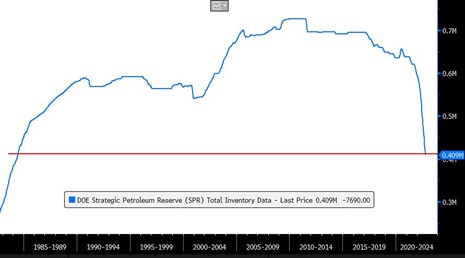 C)The geopolitical setting continues to be uncertain and tense to levels the world has not witnessed since the 1980s. China’s President Xi reiterated his assertive tone with regards to Taiwan once again at the CCP Congress. The war in Ukraine continues to hang under the spectre of an accident or an unconventional move by Putin, which could force global leaders into making decisions in a complicated economic and political setting. While we await the mid-term elections in the US, old alliances are shifting (US/Saudi/OPEC) while new defiant forces are taking power and being reinforced (success of far-right political parties in many European countries).

D)Long-term Interest rate barely escaped a potential crisis set on by the UK mini-budget measures. Yet, liquidity remains poor in bond markets as exhibited by the US government bond liquidity index which is near its 2020 Pandemic crisis levels. (See chart 2) 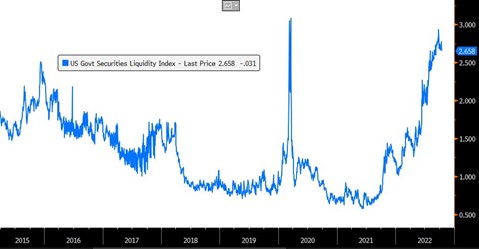 E)Inflation pressures have not eased yet, as central banks continue a very aggressive tightening cycle which has both mechanical consequences on the functioning of the rate markets and offers the potential for unintended consequences. Have they gone too far to fast?

F)Higher long-term rates combined with a noticeable economic slowdown – should it materialize – would likely test the resilience of the private asset markets and result in some mark downs. This market has had a staggering growth over the last two decades and there is no reliable or relevant data available to gauge its behavior through such an economic cycle. For instance, the Venture Capital valuations have already corrected noticeably by 60% according to Thomson Reuters VC index. 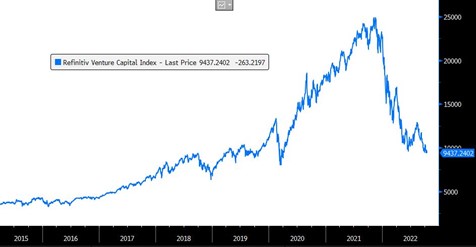 Any of these risk on a standalone basis might be manageable by a combination of political, fiscal, or monetary measures. However, in our view, what makes the road ahead challenging - akin to walking a tight rope - is that all these risks are present under the surface.

Investors and decision makers should monitor the above metrics: energy and electricity prices in Europe and US, PR policy, the evolution of the war in Ukraine, bond market liquidity, long-term interest rates, as well ad hoc and qualitative measures of the effects of rate hikes (such as credit availability and private asset valuations) closely.

Any signs that a few of them are taking a turn for the worse simultaneously, could present a great challenge for decision makers with the stability of the system (financial and/or political) and would require nimble and effective action by investors to navigate such waters.