Is it time to stop calling sterling an emerging market currency?

Sterling has suffered a turbulent couple of months. Whilst the currency had been under heavy pressure against the dollar since the end of February, its period of extreme volatility under Liz Truss’ brief leadership captured the public’s attention. Indeed, after Kwasi Kwarteng’s ‘mini-budget’ on 23rd September, sterling fell to its lowest level on record against the dollar, prompting many commentators to liken the pound to an emerging market (EM) currency. 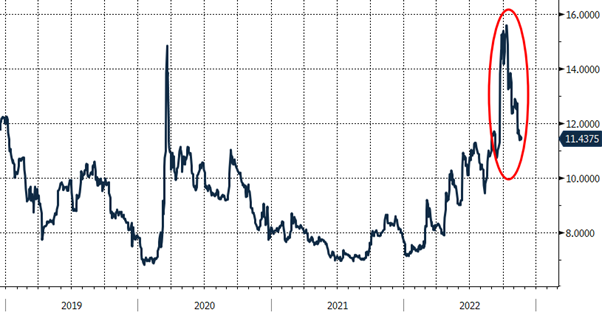 What can we expect from the pound in the months ahead?

Since the $1.0350 area lows in the early hours of 26th September, sterling recovered ~16% to test briefly back above $1.20 last week. Whether down to the steady hand of the Sunak-Hunt partnership or the simple fact that cheap currency tempted investors to buy UK assets, calls for sterling to fall below parity with the dollar have disappeared from the headlines and we are instead seeing an increasing number of commentators publishing more bullish forecasts. With sterling on a seemingly firmer footing, we ask: What can we expect from the pound in the months ahead?

It is worth considering how sterling has reacted to various data releases in recent weeks and, in particular, last week’s inflation data. In addition to sterling’s spike in volatility, the assumption that the Bank of England’s rate hikes would fail to tame inflation, therefore leading to negative real rates for a prolonged period, helped justify descriptions of sterling as an EM currency. In developed markets, we have been trained to think that higher inflation should be positive for a currency—at least in the short term—due to the expectation of higher nominal rates. This trend does not tend to be the case in emerging markets, however, because higher inflation typically results in falling real yields (i.e., inflation outpaces interest rates).

When I first saw the headline, “UK CPI rises 11.1% year on year, above expectations”, I expected sterling to start the day under pressure. In actuality, the currency remained broadly unmoved against the dollar. Rates were also broadly unchanged; we saw an uptick of about 10 basis points over the next six meetings. Whilst we should not draw too many conclusions from a single data point, the fact that we saw a similar muted reaction to weaker-than-expected retail sales data on Friday suggests that the negative sentiment surrounding sterling is wearing thin. Had either of these data points been released a month ago, sterling would almost certainly have fallen a cent or two.

So, perhaps the tide is starting to turn. Whilst the consensus forecast has jumped a couple of cents higher across all dates over the past two weeks, the fact that there is still a clear bullish bias is significant. Looking at the latest positioning data, the net positioning in GBP contracts has been gradually reduced in recent weeks, whilst the risk reversal (i.e., the cost of protecting against a move lower in GBP versus the cost of protecting against a move higher) has also narrowed considerably.

What has all the fuss been about?

As we have highlighted before, it is somewhat short-sighted to look at individual currencies in isolation. If we were to put sterling against the euro, for example, you might wonder what all the fuss has been about (EURGBP has spent most of 2022 trading between 0.83 and 0.88). We therefore must acknowledge that a softer dollar has played a role in the GBPUSD recovery. Whether the prospect of a Fed pivot or an uptick in risk sentiment will be enough to turn the greenback is a debate for another day. For now, one thing is for sure: sterling is no longer a one-way bet.

Is the US Dollar still Royal?