Impacts of the Chinese economic slowdown on the global economy

The mirror of the error - The road ahead for the Fed

2022 will be a year for the records. Marked by the resurgence of inflation after nearly 4 decades, it also was synonymous of the rebirth of macro trading putting many macro traders and funds centre stage.

Commodities came back to life and currency markets awakened with the euro reaching lows versus the US dollar not seen since shortly after it launched in the early 2000s. Sterling meanwhile suffered a massive drop breaking through the 1.05 level versus the dollar – lows not seen since 1980s - on the back of wrong-footed policy statements and the ensuing political turmoil.

In the political arena, the forces at the centre continued eroding globally becoming nearly insignificant, while both ends of the spectrum gained momentum with Italy’s far right winning elections and Brazil’s Lula making a come back to take the left into power, while Mr. Bolsonaro is following Mr. Trump’s populist playbook post-election, casting uncertainty over the transition of power in Brazil. 2022 was also marked by President Xi’s assertion of power with the end of the well-established tradition of the 10-year term limit. The consequences of such a change in the power structure of the world’s second economy and challenger to US hegemony will be far reaching and key in the years and decades to come and investors should keep focusing on analysing its effect and consequences.

But what will likely be one of the most studied and cited subjects in economic history books in the future is how monetary policy was conducted across the globe in 2022.

In particular, after being very late in acknowledging inflation, the Fed embarked on a record seven consecutive rate hikes in a span of 10 months – only 1980 saw a more aggressive nine hikes in a 10-month period.

Chart 1: Only in 1980 the Fed raised more time in such a short period of time 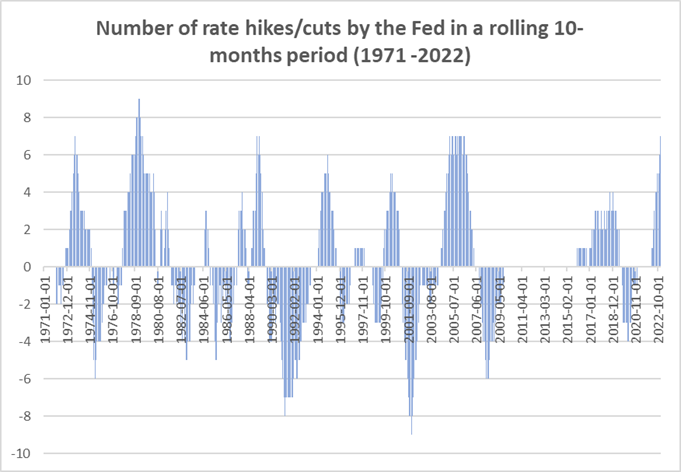 After suffering a 17% correction year-to-date in 2022 (as of December 12th) – the most since the Global Financial Crisis of 2008 – the S&P 500 and the equity markets remain extremely focused on inflation. The November CPI numbers were so important that they created a noticeable “kink” in the level of implied volatility (i.e., the price of options) around their release date of December 13th. And when they came out just slightly lower than expected, a volatile day with nearly 3% range in the S&P500 ensued.

The last meeting of the FOMC on December 14th remains another pivotal point with markets trying to gauge the likelihood of the Fed signalling a slowing of rate hikes versus a potential pause. The later would be very constructive and supportive of risk assets, while the former would still provide some relief to risk assets.

At core of the road ahead in 2023 lies the debate around a potential soft landing – a scenario the Fed is undoubtedly hoping for – versus a potential recession and/or credit contraction as a result of an overshoot by the Fed.

In our view – as stated in some of our previous notes – it is quite likely that the Fed has followed one policy error – that of acknowledging the inflation way too late – with another, one of rising “too much, too fast”.

What characterized the post pandemic inflation was its supply-driven nature. The disfunction in supply chains created global imbalances the like of which we had not witnesses in modern history. Then as supply chain imbalances were somewhat normalizing, came the unlawful invasion of Ukraine by Russia in February 2022, straining once again the global supply, in particular with regards to commodities, adding fuel to the growing pricing pressures and resulting in historically-high CPI prints.

This means that the inflation cycle was indeed “different this time”. In our view, the Fed might be committing the mirror image of its previous error.

As Chart 2 shows, the inflation expectation and economic contraction were extreme due to the pandemic, a negative “peak” of sorts. Similarly, the price increases (freight, commodities, etc.) were akin to a positive “peak shock” which has subsided at a great speed, and probably would have done so whether the Fed was as aggressive or not.

The Fed weren’t alone, the reaction functions of the BoE and ECB were also slow, and this policy error has helped put us in the position we are now. Inflation is increasingly broad based and printing multi decade highs across the developed world. In the US, recent numbers have shown worrying increases in rent and food prices and in the UK, we have inflation at 40y highs being driven by everything from fuel to furniture. On the back of recent numbers, rhetoric from the banks is starting to shift and become even more aggressively hawkish. Powell has suggested the Fed “won’t hesitate” to take rates beyond neutral if needed, and ECB member Knot hinted that moves of 50bps are in play, a marked escalation from a bank which has moved in 10bps increments since 2014.

Chart 2: mirroring the rise of inflation, can the drop be as drastic? 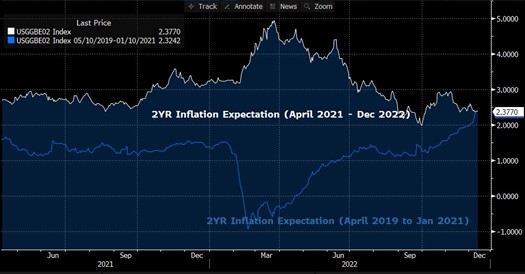 The argument for these massive consecutive rate hikes is that the Fed had to anchor inflation expectations, as well as potential second round inflationary effects via wages.

However, the question we think one must ask is: would (or should) the Fed have been as aggressive if they knew prices would correct at such a fast pace?

Despite fed overshoot, risk assets could gain in 2023

While in our view the Fed has overshot, paradoxically, a fast drop in inflation numbers could be beneficial to risk assets because the market would price a pause in the hiking cycle, helping equity prices in an environment of a higher short and long-term rate. This in turn could be followed by a drop in rates as we enter a rate cut cycle – in the 12-18 months horizon – which would then be beneficial to fixed income assets, resulting in a positive upside correlation between equities and bonds and likely softening of the US dollar, somewhat mirroring what we saw in 2022 which was the positive correlation of equities and bonds in a sell-off which challenged the classic 60/40 portfolio.

To this outlook we must add the very strong caveat of a geopolitical setting fraught with risks and dangers the likes of which the global scene has not witness in over half a century, and which might very quickly test the foundation of a financial system which remains still weak at this time.