2021 Global Macro Outlook – Part One: Where are we

It took four and a half years to negotiate, but on Christmas Eve, Boris Johnson finally announced that the UK and EU had agreed (in principle) the terms that will govern the trade in goods between the two parties as we head into 2021. After recalling Parliament early from the traditional Christmas break, both Tory and Labour MP’s voted overwhelmingly in favour of passing the deal in the House of Commons. Meanwhile, ambassadors from the 27 EU Member States unanimously approved the deal, although the agreement is still to be ratified by the European Parliament (which is expected to be a formality this month).

One of the final sticking points involved the fishing industry and the subsequent rights of EU trawlers to fish within UK waters. Although tiny from an economic perspective, it carried great weight politically and a compromise was reached in the form of an ‘adjustment period’ where EU boats will be able to continue to fish in UK waters over the next five years (the EU wanted longer, the UK wanted shorter) subject to annual reviews.

Clearly any ‘deal’ was going to differ from (and be less advantageous than) the previous arrangement, but Brexit was never really about economics, not in the short term at least. However, almost everyone seems to agree that from an economic perspective, any ‘deal’ was better than ‘no deal’ and what is now in place will help smooth the transition as we head into a new era.

In the FX market, there was always a widespread perception that in the aftermath of the referendum and the fall in sterling, a trade deal would help a recovery in the pound. This indeed proved to be the case, albeit with a couple of notable differences to what many commentators had forecast.

Firstly, as we noted in previous editions, sterling had rallied during the fourth quarter of 2020 (see chart below) in anticipation of an agreement being reached. Although it took longer than expected to conclude, there was sufficient optimism from both sides for a positive outcome to be ‘priced in’. As a result, when the deal was announced, the reaction in sterling was relatively muted (GBPUSD closed the day on the 24th December just half a cent higher, while GBPEUR was up just 33 basis points). This was in line with our expectations (as set out here before Christmas). 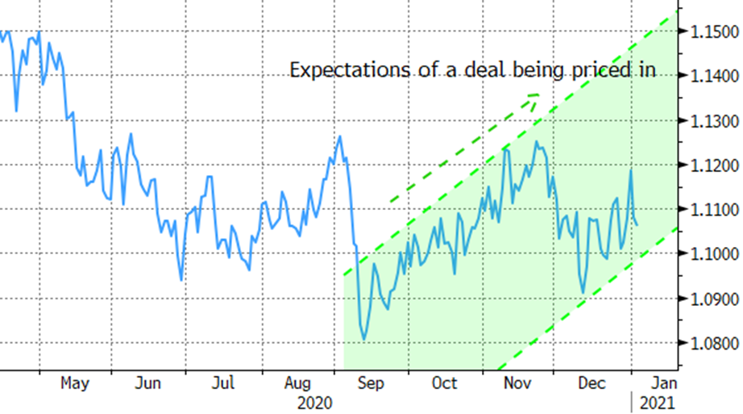 Secondly, sterling remains a far cry from the $1.50 and €1.30 that we saw prior to the referendum. This is understandable given several different factors at play (narrower interest rate differentials, less favourable trading terms, ongoing political uncertainty, COVID, etc). Even the most optimistic forecasts do not envisage a return to these levels anytime soon.

That said, the risk premium weighing on sterling has been significantly reduced. This is evident when looking at the options market, whereby volatility tumbled (1-month GBPUSD implied vol fell from 14.15% on 10th Dec to 8.89% after the deal was announced on 24th Dec). Meanwhile, risk reversals (the cost of protecting a move lower in GBPUSD vs. the cost of protecting against a move higher) narrowed considerably (see chart below). 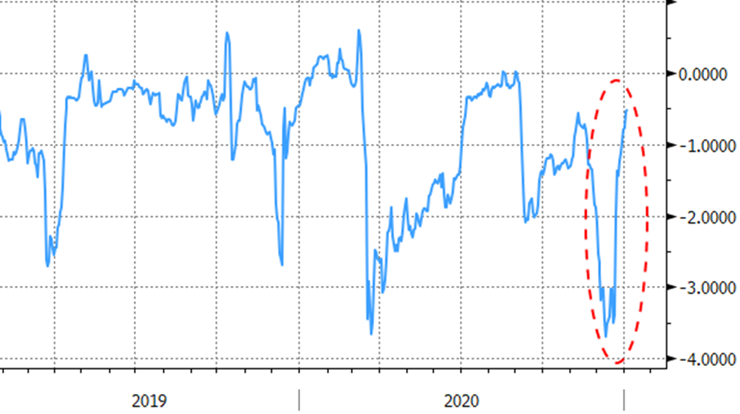 Looking ahead at 2021, there is justification for thinking that a trade agreement between the UK and EU should help loosen the shackles that have kept sterling in check over the past four years. However, we see three key reasons for us to remain a little more cautious:

We will provide a detailed outlook for 2021 in a two-part report commencing next week. Until then, we wish all our readers a Happy New Year and we look forward to the challenges that lie ahead this year!