Powell and the Fed: Reading Between the Lines

Why Bitcoin matters (to us)

To say that sterling has started 2021 in a positive fashion would be an understatement. It is the top performing currency vs. the dollar (+3.5%) in the G10 and is only beaten on the global spectrum by the Turkish Lira (+5.2%) and Paraguayan Guarani (+4.5%). After two years in the doldrums (arguably longer depending on your perspective), it feels a little odd to be talking about sterling in such sanguine language.

We see three key driving forces behind the pound’s outperformance:

Vaccine Rollout Success – The UK Government has come under heavy criticism for various aspects of its handling of the pandemic, but one undoubted success (relative to its peers) has been the rollout of its vaccination program. With 30% of adults having already received at least one dose of the vaccine, the hope (and expectation) has been that the UK economy will be able to reopen sooner rather than later, which in turn will lead to a faster economic recovery.

Removal of the Brexit Discount – Since Boris Johnson announced the Free Trade Agreement between the UK and EU on Christmas Eve, sterling has only had one negative week vs the dollar. Although other factors have undoubtedly contributed to sterling’s outperformance, the removal of the risks associated with a disorderly Brexit was a definite positive for the pound. While UK PLC faces numerous headwinds in a post Brexit environment, sterling remains considerably lower than it was pre-referendum, thus there may well be scope for further gains in the months ahead.

Expectations of Higher Interest Rates – Both the success of the vaccine rollout and the Brexit deal suggest a reduced need for additional rate cuts from the Bank of England to further support the economy in the short term. The market is currently pricing in an 8% chance of a rate cut in 2021 vs. an 85% chance back in December 2020. Longer term, gilt yields are rising on expectations of inflation. The 10yr gilt was yielding just 26 bps back on 26th January. Over the past month, this has risen to 72 bps amid indicators of rising inflation.

The pound was given a further boost yesterday when Boris Johnson announced his roadmap for easing current restrictions. Starting with schools reopening on 8th March, followed by non-essential shops reopening on 12th April, the hospitality industry will be allowed to serve customers outside from 17th May. The government expects all legal limits on social contact to be removed on 21st June.

Understandably, the dates are subject to the continued success of the vaccine rollout, infection rates not rising uncontrollably again and new variants not fundamentally changing the risk of lifting restrictions. Nevertheless, there are clearly reasons to be optimistic. Given recent price action, it is not a surprise to see sterling rise in reaction to the news.

When thinking about the outlook for currencies, we always look at three key factors: 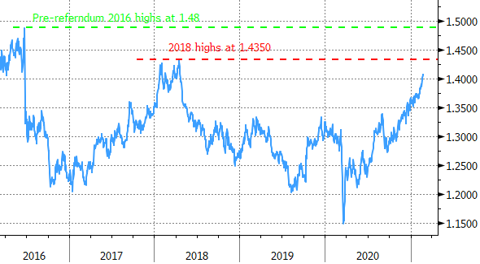 In recent weeks, we have had numerous enquiries about our views on sterling going forward, especially given the recent rally. At the beginning of 2021, we set out our three scenarios (see here) - all of which remain in play. Scenario 1 (benign reflation), where we were targeting 1.45 – 1.50 for GBPUSD and 1.15 – 1.20 for GBPEUR is currently playing out as expected.

Inflation has once again become the hot topic that is garnering attention from all corners, and we continue to see the ‘market melt-up’ scenario as a possible threat to the current dynamic. Will the central banks be able to keep longer term rates suppressed? Or will market forces determine otherwise? This is a topic we will be revisiting again in the weeks ahead, so watch this space…