Inflation: Gone but not forgotten

Powell and the Fed: Reading Between the Lines

The past trading week was unsurprisingly a quiet one given the lack of economic data, tepid news flow and market closures from the Lunar New Year. FX trading volumes were reported to be substantially lower (by ~50%) as G10 currency pairs remained largely range bound and implied FX volatilities fell to a new post-pandemic low.

Mid-week the focus was largely pinned to the release of U.S. inflation figures (which ended up relatively in line with consensus) and Fed Chair Powell’s speech at the Economic Club of New York on the ‘State of the U.S. Labor Market’. No doubt a timely one given the increased slack in the labor market, depicted by the recent miss in employment figures (change in Nonfarm Payrolls for the month of January reported at 49K, ~50K lower than consensus estimates).

Despite a positive print for employment in January (December’s print was -227K), job growth remains rather sluggish with over 10 million U.S. workers unemployed. This seems to be in stark contrast to the rallies seen in equity markets, which trade near all-time highs. It is safe to say the reflation trade is alive and well. 80% of companies on the S&P 500 that have reported earnings in 2021 thus far, beat analyst estimates. Market optimism remains high in the hopes that a successful rollout of the vaccination program, boosted by fiscal and monetary stimulus will lead to a further reopening of the U.S. economy and increased economic activity. The question that resides is whether the labor market will follow suit and reach levels near the Fed’s goal of ‘maximum employment’, a significant factor for the Fed’s consideration on tightening monetary policy.

The Fed maintains its dovish stance and continues to favor its accommodative policy measures, as relayed again by Powell’s remarks this past week. The Fed Chair reiterated the view that the current measures will remain in place until labor market conditions return and inflation levels moderately exceed the 2% mark for some time. Unlike earlier economic cycles, a stable and inverse relationship between inflation and unemployment, characterized by the Phillips Curve, is absent or at best loosely held in today’s economy. This has led the Fed to re-think and make changes to its existing monetary policy to further support a well functioning labor market rather than just focus on an inflation target.

Consensus among the Fed members is for the policy rate to remain unchanged until after 2023 (see Chart 1). This forward-looking guidance from the Fed (introduced as a dot plot in 2012 amid the country’s economic recovery from the 2008 financial crisis) is to create more predictability around the Fed’s outlook and reduce the likelihood of Fed driven market shocks.

The continued dovishness from the Fed and Powell’s acutely cautious tone (such as his remark on “still being very far from a strong labor market”) seemingly takes any discussion of asset tapering or rate hikes off the table. Reliance on economic data is increasingly high, with sustained positive prints on the inflation and employment front needed before we see a shift in the Fed’s position.

Looking closely at the messaging, the Fed seems hell bent on avoiding a taper tantrum shock, the likes of which occurred in 2013. At a time when unemployment and core inflation levels were far from ideal (7.9% and 1.5% respectively), then Fed Chief Ben Bernanke tipped the FOMC’s thoughts on asset tapering in an appearance before congress in May of 2013. The result was skyrocketing bond yields (U.S. 5Y yields tripled in a matter of months) and declining equity markets. This is no doubt still fresh for Fed Chair Powell, given it was his first full year on the Fed’s board of governors. Hence, be wary of any near-term announcements from the Fed, other than the monotone guidance that has been repeated.

Despite the Fed’s monthly bond purchases to the tune of $120 billion, we see a continued steepening of the U.S. Treasury yield curve signaling investors expectations of economic expansion and higher inflation in the years to come (see last week’s article on key drivers that can ramp up inflation). Furthermore, the prospect of Biden’s fiscal stimulus plan is increasing longer-term yields, with the 30-year Treasury yield reaching its 1-year high at just over 2% (see Chart 2). What does this mean from the Fed’s perspective? Despite rates edging higher in a short time period, longer-term yields still trade ~40bps under pre-pandemic levels, but it is worth keeping an eye on the steepening of the curve along with future inflation prints (see ‘Market Melt-Up’ scenario in the article on 2021 Global Macro Outlook Part Two). 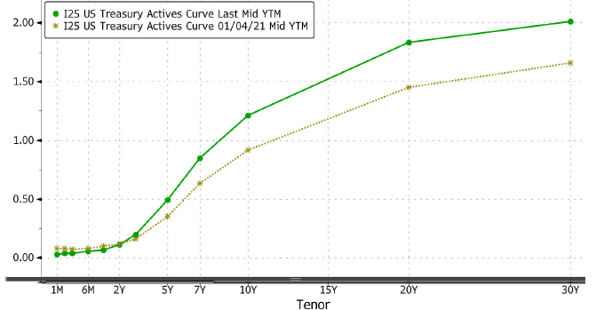 Powell’s speech did little to move markets, as the rhetoric was largely in line with the broader messaging over the past few weeks. The U.S. Dollar Index was rangebound during the week (see Chart 3) and failed to pick up steam when overall risk sentiment slightly increased towards the end of the week.

What is interesting to note is that the inverse correlation between the S&P and the U.S. Dollar Index has declined as of late (see Chart 4). Ultra accommodative monetary policy has steered the fast development of certain market themes which by fundamental nature are slower moving. One example is the rise of cross-asset correlations, which in a world with ample liquidity and low borrowing costs, has led to steep rises in asset prices and a decline in the USD. Keep an eye on correlations which can drive the impact to the DXY. A strengthening factor for cross-asset correlations could be the emergence of U.S. fiscal optimism.

With the national vaccination program underway and accommodative central bank policy measures, the market remains optimistic on the continued re-opening of U.S. economy. Nevertheless, if the 2013 taper tantrum has taught us anything, I would not expect the Fed to deviate from its dovish rhetoric anytime soon. Continue to follow the data for strides in unemployment and inflation figures, while keeping a close eye on Treasury yields and cross asset correlations.