Loonie in the Spotlight

What is driving the CAD?

In the first quarter of 2021, the USD was one of the best performing currencies and strengthened against a majority of G10 nations, proving its resilience in a reflationary environment where global bond prices are on the decline and traditional haven currencies lose traction. Across major currency baskets, only two currencies outperformed the big dollar: GBP and CAD. The Canadian Dollar was the biggest gainer in 1Q-2021, despite ongoing fallouts from the pandemic including increased lockdown measures and continued delays in the vaccination program.

The bulk of CAD gains materialized intra-quarter, with bullish moves seen across major CAD crosses. In recent weeks, however, CAD momentum subsided to some degree and traded sideways. Let’s take a look at some of the key factors that contributed to CAD strength in Q1: 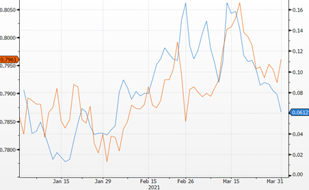 Commodity markets continue to rally, supported by rising global demand as nations start to emerge from pandemic related closures. China’s strong economic recovery is partly contributing to increased commodity flows, specifically on the energy front. Crude oil prices (Canada’s main export) are up ~25% (increased as high as ~35%) for the quarter providing a further boost to CAD. The Bank of Canada (BoC) looks at a price index of 26 commodities produced locally and sold in world markets – the total basket is up ~15% YTD and has correlated strongly to CAD (see Chart 2). 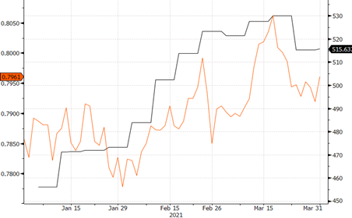 Over the past decade, the S&P 500 has outperformed the Toronto Stock Exchange (TSX) in nine out of ten years, to the tune of ~200% (difference of cumulative total return). Low interest rates and ongoing monetary and fiscal stimulus measures continue to boost equity markets, with the TSX up 8% in the quarter (vs 6% for the S&P 500).

Canadian equity markets are picking up traction for a number of reasons:

4. Economic data is positive and continues to beat market expectations

Recent Canadian data releases have shown signs of improvement for the overall economy. Employment figures for the month of March jumped by +303K (vs consensus estimate of +100K), as job creation was driven by all classes of workers.

The unemployment rate reduced from 8.2% to 7.5% but remains well away from the pre-pandemic level of 5.7%. Economic momentum was also shown by a pickup in GDP growth (0.7% in Jan), beating consensus and easing fears of an outright economic downturn. Year on year inflation growth however remains just above the 1% level, well below the BoC’s target 2% level.

The above driving forces have no doubt fueled Canadian dollar strength, however whether it could propel further momentum remains to be seen. There are several mitigant factors to be considered in the near-term that could hamper recent CAD appreciation.

The BoC acknowledged the strong economic activity at its meeting in March and highlighted the bright prospects for Canadian exports and business investment in light of improving foreign demand. As a result, the market is pricing in a tapering of its quantitative easing program (at its April meeting), and a reduction in bond purchases from $4 billion to $3 billion per week.

Uncertainty remains on the Bank’s forward guidance on its policy rate – given the firm economic backdrop and strong data, it could make for a good case for the Bank to pull forward its rate hike expectations, but recent restrictions resulting in continued economic slack could mean otherwise.

Canada has lagged its peer nations on the vaccine roll-out plan. Ongoing delays and restrictions will no doubt place near-term pressure on the Canadian dollar, as investors shift their focus to economies that are farther along in the recovery cycle. Barring additional supply disruptions – Canada expects two million vaccine doses this week and continued supply from Pfizer of 1 million doses per week until the end of May (thereafter ramping up to 2 million per week). This ramp up, along with lifting of restrictions could lead to a resumption in the upward trajectory of the Canadian dollar as we head into the peak summer months, moving closer to achieving critical mass.