The hour of Climate Risk has come.What does this mean for investors?

“There is a dramatic change in the frequency with which extreme weather events occur.”

The last few weeks have seen several record setting climate related events causing damage and suffering across the globe. From unprecedent and repeated floods in Europe, to the equivalent of eight months of rainfall in a single hour in Zhengzhou, China, what is unique about these latest events is their increased frequency and virulence.

The chart below shows how the US has witnessed massive increases in the number of billion-dollar climate disaster events since 1980.

Climate change has been at the forefront of the news for the last three decades and today there is a near consensus, both on its reality and the necessity to address it in an urgent matter.

Yet in general, we are becoming accustomed to seeing climate change as a progressive and continuous process. In fact, the annual increases in oceanic/atmospheric temperature and the sea level rise (Chart 2) are minimal compared to the scale of change that we are all used to witnessing in our daily lives, and do not resonate with us as a source of immediate alarm. 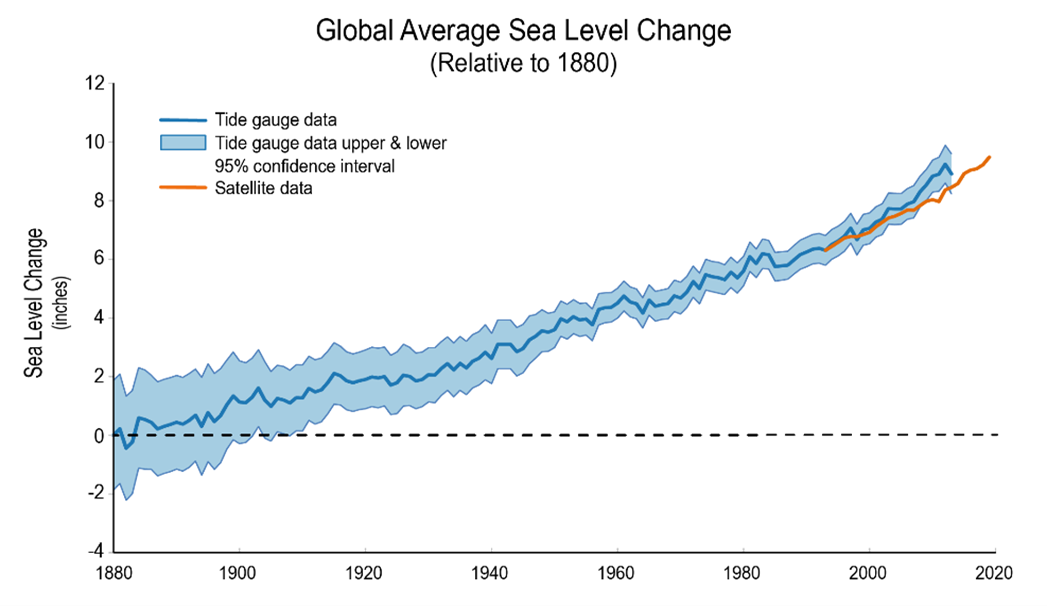 Discontinuity is not natural for us

As humans, we are “wired” to perceive and look at the world surrounding us in continuous terms, which is why for millennia we have struggled to deal with discontinuous natural phenomena such as earthquakes, volcano eruptions or fast changing and exponential phenomena such as floods, wildfires, or pandemics.

Similarly, in the financial markets, sell-offs and crashes in asset prices are discontinuous events that keep happening. However, each time they seem to surprise investors, catching them unaware and causing pain and financial loss.

What makes matters more complicated, when it comes to discontinuous events, is that they are usually not predictable with any degree of accuracy. For instance, despite all the progress in science, we have virtually no way of precisely predicting when an earthquake is likely to happen. Similarly, it is often anyone’s guess as to when the next market crash is likely to happen, even though some astute investors might have a sense of heightened risk.

How does this relate to Climate Risk?

Having spent many years studying and analyzing tail events in financial markets and conducting in-depth work on discontinuity in some natural phenomena, such as Tsunami’s, in our view, the recent increase in the frequency and virulence of climate events signals an increase in the probability that we will face a discontinuous climate event in the short to medium-term horizon; in a scale of years and not decades.

What this means for investors

To provide some thought framework, we would like to highlight three of the potential consequences of climate discontinuity, which may be useful for investors to consider from a risk management perspective.

A major climate discontinuity event will very likely affect commodity prices, in particular agricultural and soft commodities. The reduction and/or geographical shift in cultivable areas, combined with other adverse conditions, such as floods or drought will likely affect the supply side and food security in more dramatic ways than we have witnessed to date.

Other commodities could also be affected, to the extent that they would face new adverse conditions for their extraction and production, for example, extreme mining temperatures and offshore drilling challenges.

Climate discontinuity would likely either be caused by or directly affect the natural equilibrium of flows that establish weather and oceanic patterns. For instance, so far in 2021, scientists point to the changes in the shape of the jet stream as an explanation for the wildfires in Russia and floods in Europe.

A more extreme and sudden change in any of these patterns can have far reaching permanent effects, one of which is rendering parts of the global transport network unpracticable while potentially opening some new (albeit limited) permanent routes, such as the Northwest Passage in the arctic. International trade and transport could be severely affected before a new status and global transport map emerges.

Some of the geopolitical effects of climate change are already in full display. The tensions over water rights involving Sudan, Ethiopia, and Egypt and similar tensions/wrangling in the Middle East are specific examples of the geopolitical risks of climate change. While solutions are sought through a traditional diplomacy framework, should climate discontinuity exacerbate these trends, geopolitical tensions over water are likely to increase noticeably, for both cultivable land and possibly habitable land.

Lastly, migration flows, which would result from climate discontinuity, will likely have far reaching economic and political consequences. Whether our societies can (and how they will) deal with such massive shifts remains an open question.

If one were to takeaway a single lesson from the pandemic, it is to go back and recall that just two weeks before the fastest selloff in the history of equity markets, politicians and mainstream media were anything but alarmist or pointing to any of the risks and dysfunctionalities that plagued us for over a year but started only a couple weeks later.

A climate discontinuity event is only a risk (albeit a non-negligible one in our view), so it is crucial for investors and companies alike to incorporate it into their risk management framework, rather than finding themselves dealing with it ex-post.