The month of October was by far one of the most eventful since March 2020 from a monetary policy and market expectations perspective.

On one hand, the Bank of Canada’s (BoC) somewhat hawkish stand surprised the markets which proceeded to pricing on rate hikes in the near future. On the other, a sustained increase in consumer prices and a hawkish rhetoric from Bank of England members, built up expectation of an imminent rate hike at their November meeting followed by nearly 3 more hikes by June of 2022.

These sudden shifts in expectations for a fast-paced increase in short term rates in the UK and Canada (by the end of October, the market priced nearly 4 hikes in each country by June 2022), appeared both extreme in a historical context but also were markedly different than what markets price for the US: a Fed on hold with only around 80% probability of a single hike by June 2022.

Chart 1: Expectations changing fast in the last month and half 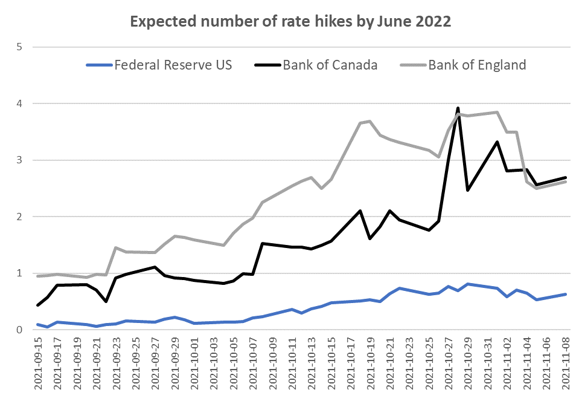 Chair Powell maneuvered skillfully the press conference following the Fed meeting on November 3rd. While the Fed delivered the $15 billion per month in tapering as expected, with regards to “lift-off” (i.e., first rate hike from the zero boundary) Powell pushed back by saying that he did not see it before near the end of 2022, a timeline also echoed in Richard Clarida’s speech on Monday.

This was followed by the BoE policy meeting on November 4th. It did not raise the overnight rate, although the monetary policy report acknowledged that inflation will likely hit 5% by next spring and that modest increases in overnight rates were likely warranted.

Many market participants were taken wrong footed, and money market rates dropped abruptly in order to price out rate hikes to less than 3 hikes by June 2022.

Where do we stand now?

Here are 3 observations that can be helpful in framing where we are and what might lie ahead of us.

1. Not a fundamental divergence

The divergence in expectations for rate hikes over the next quarters between, on the one hand UK and Canada and, on the other hand, the EU and US is quite important, especially if one considers the fact that economic data is relatively similar and benign among these countries. While such divergences might have been observed in the past – more recently after the global Financial Crisis (GFC) of 2008 when Canada raised rates three times with a Fed on hold – the economic recovery post-GFC was quite different among jurisdictions and easily explained those divergences. Presently, it is difficult to see these divergences persist unless the economic recovery becomes much less synchronous among them.

The highest probability path in our view is therefore the one where these expectations will converge closer: the US – and potentially EU though this is less likely – pricing higher probability of a “lift-off” sooner or UK and Canada expectations for aggressive rate hikes fading away somewhat

The last time overnight rates in the US were close the zero boundary – the infamous ZIRP – was after the GFC and questions surrounding “lift off” pre-occupied the market for nearly 18 months prior to the actual first hike by the Fed in late 2015.

In the months to come as market participants remain closely focused on the questions surrounding inflation, growth and employment to try and frame the timing for rate hikes, we are likely to observe more volatility in the money markets and short-term rates in particular. Such volatility makes for opportunities among others, to tactically establish or adjust any FX hedges in light of changing levels of carry.

It is worthwhile noticing that the MOVE index – a volatility index for fixed income markets similar to the VIX for equity markets – appears to be coming to life again and reached post-pandemic highs last week. 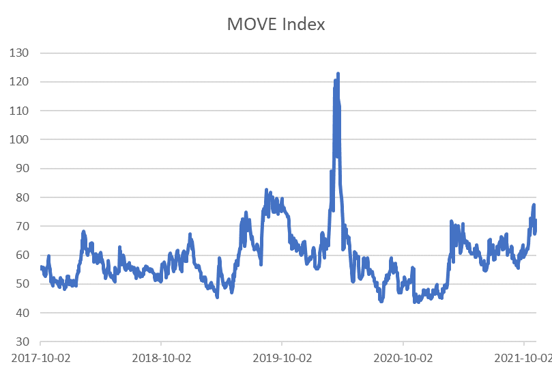 The last time Canada actually raised rates (3 times) with a Fed on hold was in 2010 as it had weathered the GFC with little damage and flying colours. During that episode the Canadian dollar strengthened and broke through parity. Similarly, UK overnight rate was about 50bps higher than the Fed fund rate and the GBP remained quite strong.

So far in this latest episode, the FX market moves (GBP and CAD) have been quite muted relative to the differential in short term rate expectations. It is hard to know whether this is due to the fact that the FX market sees this divergence fading (i.e., doesn’t believe it”) or whether is due to short term technical flows in both rate and FX markets, or most probably a combination of both. As a result, it is very likely that either the differential will tighten, or the currency crosses will start to be on the move in the weeks to months to come.

This as an opportunity capture relative value; for instance, by re-adjusting and/or initiating hedging positions in both short-term rates and GBP and CAD in light of one’s exposure.