The Perils of Poor Liquidity

The Convexity of Omicron

Market gears up for policy meetings as Fed changes narrative

2021 may be coming to a close but the market has other ideas. The recent switch in tone from the Fed surprised many and the divided response is a prime example of how precarious recent central bank rhetoric has been. All eyes now turn to the ‘Big Three’ policy meetings taking place later this month.

As we wind down the year and inch closer to the holiday season, the markets seem a long way off to turning the page on 2021. Over the next few weeks, there are a multitude of events / risk factors that will shape up how we close the year and drive the outlook for 2022 – notably we have the big three policy meetings (Fed, ECB, BoE) mid-month. With policy rate hike probabilities constantly shifting, its clear the market remains wary of central bank action. The Fed falls into that camp, as it continues to pivot from its messaging and drives market uncertainty, which is prevalent in pricing across asset classes.

Following Fed Chair Powell’s recent change in tone on inflation and the removal of the ‘transitory’ narrative, a quicker taper timeline is on the table which provides added flexibility for the Fed to embark on its rate lift-off cycle sooner than expected. The heightened risk of inflation was previously highlighted by central bankers in Policy meetings, but we’re starting to see acknowledgement of a sustained and lingering inflationary environment. In certain emerging markets, which have seen the devastating effects of inflation, this issue is already top of mind. With Powell now leading the pack however, its only a matter of time for other developed nations to follow.

Under these circumstances, it now begs the questions as to how markets will react and whether pricing dynamics will alter significantly. Elevated volatility across asset classes is already present, as seen by the VIX and Bank of America’s MOVE index and are likely to persist. We’ve highlighted in previous editions, the lull in volatility for FX markets but that is slowly starting to rise and catch up to broader moves in rates and treasuries. It’s worth examining how central banks, accepting of this new inflationary narrative and exiting the ‘transitory’ framework, will leverage policy tools – are we talking unanimous rate hikes across the board? Possibly, but if recent activity and history has taught us anything, its better to go in with a holistic view of probable outcomes.

Impact of narrative change felt across the market

Along with the rise in volatility, we’re seeing a larger intra day move in fundamental hedging costs as interest rate differentials shift, and this could continue leading up to the central bank meetings. The sharp rise in US yields post Powell’s testimony was short-lived as market fears over the new variant led to a broader risk-off sentiment and a drop in yields. Break-even rates in the US, a measure of implied inflation rates, remain high but fell off as a result (see Chart 1). As a USD fund hedging its FX exposure, the cost to hedging could rise, or the benefit could fall, materially as yields pick up in light of inflation expectations. 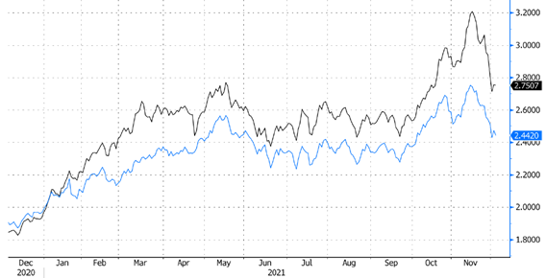 The taper strategy from the Fed is expected to begin this month, initially set at $15B per month for a period of ~8 months. Under the new circumstances be prepared for a faster taper that could potentially conclude in a 4–5-month period, paving the way for higher bond yields. The impact to currency markets will depend on whether Powell sticks with hawkish sentiment and how other central banks respond. There will be greater pressure to adopt a similar narrative, but with ongoing risks from the Omicron variant and a possible lapse in economic activity, it wouldn’t be surprising to see other major banks like the BoE and ECB take a back seat.

A recent Bloomberg survey was done on hedge funds and market participants on how they intend to position themselves in light of monetary policy evolvement from the Fed. It was evidently clear that rising rates was the common theme / concern, however the uncertainty on when and how this would occur led to different stakeholders focusing on various points across the Treasury curve (short vs long end). This divide is a prime example of how precarious recent central bank rhetoric has been and its inability to soothe the market.

Pressure for the Fed to concede is rising

With the USD has been on a bullish trend, the dollar index is at YTD highs, and upward momentum is seemingly unphased. Following Powell’s remarks, the probability of a US rate hike is steadily building and the market seems to be at an inflection point. A number of Fed speakers have been on the wires this week and the support for an accelerated taper and potential earlier hike seems unanimous – after all with both employment and inflation now within ‘tolerant’ bands of the Fed’s framework, the pressure to concede is seemingly rising.

Whether this shift in stance from Powell comes too late in the game, and how credible / digestible it actually is from a market perspective, remains to be seen. Any tightening approach to monetary policy will be cautiously communicated from the Fed, with the next FOMC dot plot providing a clearer indication on timing, in order to avoid a market upset and swing in risk assets. With that in mind, be cautious of divergent central bank approaches resulting in increased volatility, wider interest rate differentials and potentially higher hedging costs to follow.