Russia, Ukraine and the implications of global sanctions: the demise of the dollar?

In a desperate attempt to look at something other than the devastating scenes in Ukraine, this week seems like an opportune moment to revisit the dilemmas facing the Bank of England and its stance on monetary policy. Yesterday, £28bn of Government bonds rolled off and for the first time in years, the proceeds won’t be reinvested by the Bank of England. Next week, the MPC is widely expected to raise the base rate by another 25 basis points to 0.75%. With the UK consumer already feeling the pain of rising inflation, particularly in the form of food and energy, we find ourselves asking, how does that MPC balance the risks of rising prices and slowing growth? 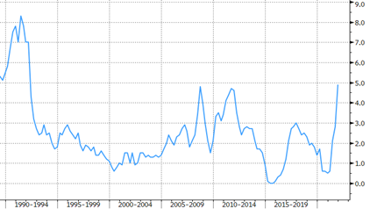 First and foremost, we’re all aware of a new era of rising prices. Whether we’re reading about inflation in the mainstream media, feeling the impact firsthand at the supermarket or feeling the squeeze when another utility bill lands on the door mat, the increased cost of living is being felt by us all. While some will quite rightly argue that tightening monetary policy will have little direct impact on inflation stemming from supply side constraints, it’s the secondary effects resulting from pent up demand and higher wages that will concern the MPC members most.

Consequently, the market is fully pricing in five quarter point hikes over the course of the next five meetings and potential for a sixth before year end. Meanwhile, deputy governor, Ben Broadbent has said that the Bank of England will continue selling assets under a new quantitative tightening program even as the bank rate moves potentially both up and down.

Meanwhile, the bank has begun selling the £20bn of corporate bonds it owned under the QE scheme but will only begin active sales of gilts once the bank rate reaches 1%.

We know that the tightening process will be slow and gradual, but the question remains over whether the consumer is able to withstand the impact of higher borrowing costs. At a time when the man on the street is already feeling the pain of higher food and energy prices and an impending rise in national insurance, it seems inevitable that the UK economy is set for a period of much slower growth in the coming years. For now, unemployment remains low, retail sales are steady and headline GDP looks relatively robust. However, consumer confidence has fallen to its lowest level in a year and prior to the pandemic, levels not seen since 2013 and hence the outlook may not be so rosy. All that said, most economists seem to be in agreement that a slow but steady approach to tightening is the right path for the MPC. Moreover, the market seems convinced that this is indeed the path that interest rates will take over the coming year. The question we therefore find ourselves asking is whether or not the market has got ahead of itself by pricing in almost six quarter point rate hikes before the end of 2022 and if so, what does this means for the pound?

Chart 2: Number of hikes priced in for the BOE

Regular readers will recall that this was one of the four scenarios we set out for 2022 and whilst scenario 4 (the flight to quality) has undoubtedly played out over the past couple of weeks, we continue to question whether the market is expecting too much from the Bank of England. We’ve already seen expectations for ECB tightening later this year pared back due to the uncertainty created by the war in Ukraine and although we saw a slight flattening of the UK curve early last week, this has since been reversed.

Given the ‘risk off’ environment we currently find ourselves in, it’s no surprise to see the dollar advancing against all its major counterparts as investors flock towards safe haven assets. However, what is also particularly notable, is that the euro has been the second worst performing currency in the G10 basket (only the Swedish Krona has fared worse). There are a number of influences at play here, but expectations for ECB monetary policy are certainly a key driving force. With this in mind, we continue to see justification for remaining cautious about sterling going forward given how aggressive expectations of higher rates are and the risk for disappointment.