A Hawkish BoE is not enough

Parity Watch: Plummeting pound may have further to fall

In recent months, it has been virtually impossible to avoid reports on the energy crisis spreading across Europe. In the months following Russia’s invasion of Ukraine, we have seen energy prices soar across the continent. A combination of short-sighted (admittedly hindsight is 20/20) pre-war policies (blocking gas developments in the UK, closing nuclear stations in Germany) and Russia’s aggression has left businesses and individuals wondering how they’ll pay their bills this winter, central banks doing what they can to fight inflation, and governments scrambling to get aid packages in place. Indeed, new Prime Minister Liz Truss’s first action was to announce a huge package aimed at capping household energy bills at £2,500 – the economic effects of which will play out over the coming weeks, months and beyond.

Chart 1: UK Natural Gas prices have been incredibly volatile in the months leading up to the war and after the invasion 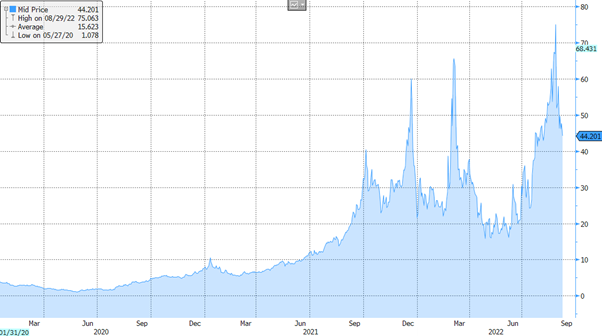 Though the price crisis itself is worthy of discussion, we want to look at a knock-on effect which should catch the eye of any risk manager. In recent days it became painfully clear that energy companies were facing existential liquidity issues. The hedging they had in place had been margin called, and in volatile markets these margin calls had reportedly grown to a total of EUR 1.5trn. One reported reason for the margin call is the so-called “clean spark spread”. Firms sell electricity futures, guaranteeing the price at which they will sell their generated electricity, and they buy gas futures, guaranteeing the price they will have to pay for gas to generate the electricity. This usually stable spread acted very erratically in the recent volatile energy markets and electricity prices jumped without gas following – leading to margin calls as the futures trade on separate values and cannot net.

So severe has the margin call issue become that governments are being forced to step in. In the UK, the Bank of England, alongside the Treasury, have set up the Energy Markets Financing Scheme, which will allow struggling firms to access up to £40bn in liquidity to prevent failures. Similar schemes are being worked on across the EU.

The Fed weren’t alone, the reaction functions of the BoE and ECB were also slow, and this policy error has helped put us in the position we are now. Inflation is increasingly broad based and printing multi decade highs across the developed world. In the US, recent numbers have shown worrying increases in rent and food prices and in the UK, we have inflation at 40y highs being driven by everything from fuel to furniture. On the back of recent numbers, rhetoric from the banks is starting to shift and become even more aggressively hawkish. Powell has suggested the Fed “won’t hesitate” to take rates beyond neutral if needed, and ECB member Knot hinted that moves of 50bps are in play, a marked escalation from a bank which has moved in 10bps increments since 2014.

Readers of this may wonder what energy hedging has to do with them. We focus more acutely on FX risks, but the parallels are clear. Private capital funds engaged in FX hedging use OTC contracts (most commonly forwards) to hedge long dated exposures arising from their investments. In much the same way as energy contracts on different exchanges cannot experience collateral netting, neither can investments vs. forwards. Though the investments will help give banking counterparties comfort in offering credit, margin or collateral calls are not out of the question and money tied up at a bank earning OIS is a nightmare for any fund manager.

This is where managing your margin risk, or liquidity risks, become paramount – and there are a few key pillars to keep in mind. Firstly, you want to make sure the size of the banking panel is appropriate for the hedging program you have in place. Too few banks and you risk quickly exceeding credit limits, too many banks and you risk spoiling relationships with limited business spread across several counterparties. It is also imperative to select counterparties which meet your hedging requirements – some specialise in emerging markets; others may be better suited to long dated hedges, etc.

Another area which can ease collateral call risks is the period of ISDA negotiation. This difficult and often drawn-out process can have significant impacts on your hedging programs down the line – understanding how the terms of your ISDA effect credit conditions as the fund changes and matures is critical and having a way to ensure the terms you are receiving are competitive versus peers are just a couple of ways in which ISDA negotiating can aid or hinder risk managers’ plans.

Finally, it is prudent to be ready for big market moves – knowing rates at which collateral posting becomes likely allows risk managers to plan ahead. As we approach pain points in a currency pair, we can start enacting a plan. This may be to renegotiate ISDA terms or simply to novate the hedges to another counterparty with more credit room. Either way, having an easy-to-understand model in place is a great tool to avoid “surprise” calls from hedge counterparties.