In the most recent ECB meeting we saw Christine Lagarde & co. continue their commitment to tackling runaway inflation. The governing council hiked rates 0.75% for the second consecutive meeting, taking rates to 1.5%, the highest level in over a decade. The accompanying press release said many of the right things – they are making “substantial progress in withdrawing monetary policy accommodation”, that “inflation remains far too high and will stay above the target for an extended period”, and that we should expected rates to be hiked further. But markets like nothing more than digging into the details. Scratch the surface and it becomes clear that the ECB continues to walk a tightrope, with the potential for significant two-way volatility in high rates.

The first warning sign to the markets was the change in commitment to rate hikes. References to hikes continuing for “several meetings” were removed and replaced with expectations that rates will be hiked “further”. When pushed about the change in her press conference, Lagarde explained that the committee still had “ground to cover” and that it may well be “several meetings” but emphasised the uncertain times and that each meeting will be treated separately. Though this isn’t really a change in sentiment, the market reaction to the removal of the language was dovish, no doubt aided by Lagarde’s point to the growth slowdown in the bloc, describing a “higher likelihood or a recession”. The immediate aftermath saw the market reprice terminal EU rates lower by some 30bps, and the Euro fall more than 1% against the US Dollar.

Concerns about growth and ECB rate hikes are being exacerbated by politicians across the Eurozone, perhaps most notably by Italy’s new Prime Minister, Giorgia Meloni. In her first speech to lawmakers in Rome she took the opportunity to call out the ECB’s rate hikes, describing them as hazardous and creating additional difficulties for those countries with high national debt, such as Italy. Criticism from Meloni is not overly shocking. She has already provoked the ire of the EU powers, but on this matter, she is not alone. The more pro-EU voice of Emmanuel Macron has also raised concerns about the ECB’s hikes, explaining recently his worries about the expert opinion that “demand should be broken to better contain inflation”.

Though central banks globally will claim to act independently and only in relation to their mandates, we know this to be a slight oversimplification. Fair transmission of monetary conditions feels, at this point, to be somewhat of a central pillar of the ECB’s function, the TPI being its most recent mechanism to aid with this task. Pressure from nations seen as biggest risks, either for leaving the bloc or taking it down, will not go unnoticed by the ECB, which is what makes Meloni’s comments so interesting. Whether Meloni had a direct impact on rhetoric or not, the dovish perception of the latest meeting was a net positive for Italy, as exemplified by the Italian German 10y yield spread, which tightened almost 20bps on the day.

Inflation turnaround: No such comfort for the EU

On the other side of the dovish ECB argument, lest we forget, is the inflationary environment. The most recent inflation data from the bloc came in at an all-time high of 10.7%, up from 9.9% a month earlier. If the US is starting to see potential green shoots of an inflation turnaround, the EU has no such comfort. The price pressures from the Russia/Ukraine conflict are still being seen in the numbers, and even if gas storage is near capacity in the EU and prices are falling, these effects take time to pass through and may be short lived. With no end to the conflict in sight, and no obvious way to fill the large hole left by Russia’s curtailed flows, the energy inflation complex could easily be a protracted one. The longer these dynamics last, the greater the risk of inflation becoming embedded and extending to wages and other areas of the economy. Indeed, we may already be there. The most recent CPI print had inflation excluding energy hitting a record high of 6.9% and overall core CPI also at a record level of 5%. The inflation issue is now broad based across all EU nations and October marked the first time the reading was above 7% for all single currency countries at the same time. 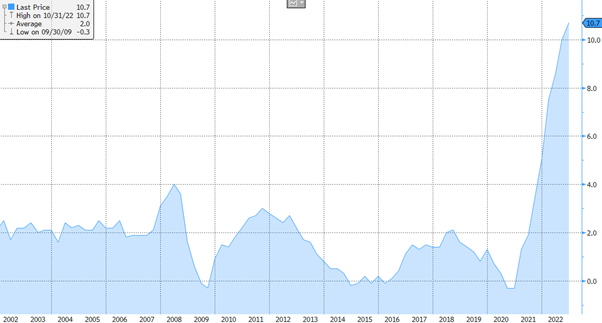 For investors or risk managers with exposure to Euro interest rates, there is little one can be certain of, except the continuation of uncertainty. Everything the ECB presents needs to be taken with a large pinch of salt – the messaging has been consistently unreliable this year and continues to be confusing and volatility inducing. With interest rate risk seemingly here to stay, a robust hedging strategy should be the goal, and with volatility in the market so high, being able to act when opportunities present themselves is critical, for example the recent large pull back in rates following the meeting. These chances are often fleeting, so it’s important to enable hedgers to act swiftly when the time is right.