Heading into 2023, the macro landscape is less transparent than it has been in the years post-Covid. Over the last two years, we have seen inflation rise with each print, leading central banks to hike rates accordingly. Nerves about the long-term effects of increasing front-end rates flattened rates curves and pushed investors toward the dollar as the haven currency of choice. We now find ourselves at an inflection point: CPI prints have started to fall, central bankers are using more nuanced language, and the sheen of the dollar is beginning to fade. In this article, we look at the macro factors driving markets in the US, EU, and UK for the coming months and how they might affect risk managers of all types.

The Fed versus the markets

In the US, the Fed has continued to reiterate its desire to hike rates and bring inflation under control. During a recent meeting, Powell highlighted that the market is under-pricing the terminal rate and the length of time it will remain restrictive, arguing that over hiking is the lesser evil. But the market does not care. In the most recent dot plot, Fed members expected rates to climb to at least 5.1% by the end of 2023. Market pricing, however, puts the Fed rate at 4.3% by year end and has it peaking at <5%, lower than all but two Fed members’ expectations.

This dynamic is the result of a push and pull between inflation and growth. Fed officials remain concerned about inflation overshoot, and not without reason: their preferred measure—the PCE—remains stubbornly high at 4.7%, more than double their target. While the CPI has been steadily falling for the last five months, there has been no such trend in the PCE. The market, which now appears to be less concerned about inflation, views this trend in the CPI as supportive of its argument. Instead of inflation, a potential employment downturn is now gathering focus. Although recent NFP data has been strong, this measure is volatile, backward-looking, and often not very accurate. Other labour measures, such as the household survey and pace of hiring, paint a much more dire picture. Indeed, leading indicators like the NAHB housing survey and PMIs point toward an aggressive economic downturn.

Risk managers need to watch this dynamic carefully. If the Fed is correct and rates rise more aggressively than currently priced (and stay there longer), we could see another leg higher in the dollar and the cost of borrowing for those unhedged will again increase. If the market is correct and employment numbers begin to tumble, a Fed pivot would see the dollar continue to weaken at a potentially accelerated pace. This would benefit unhedged borrowers, allowing them to lock in a lower cost of funding than expected

Chart 1: While the US CPI has trended lower, the PCE has not shown the same positive signs of falling 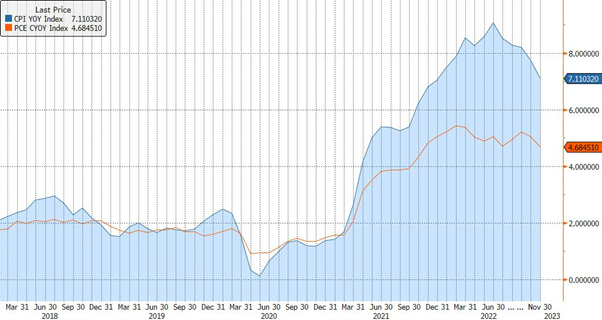 The issues facing the EU are, in some ways, very similar to those seen in the US. While the CPI has seemingly peaked and is starting to trend lower, any optimism is counteracted by stubborn core inflation and the fact that the CPI missed economists’ expectations at the last release. As a result, the ECB has continued to bang the hawkish drum: in the most recent meeting, for example, officials said the ECB still has to raise rates “significantly” to curb inflation. President Lagarde emphasised this point, saying: “We’re not slowing down. We’re in for the long game.” As per usual, nothing is simple in the EU and these measures were immediately met with a volley of discontent from Italian Members of Parliament. Deputy PM Salvini called the hikes “unbelievable, baffling, worrying,” while the defence minister said hiking “makes no sense” and winding down QE is “crazy.”

This is an obvious cause for concern for investors, risk managers, and the bureaucrats in Brussels, and has us closely watching the Italian/German 10y spread. We saw first-hand in the UK how quickly a bond crisis can take hold; last autumn’s mini-budget caused yields to soar, leading pension funds to almost crumble as once high-quality liquid assets lost large percentages of their value. In that instance, the BoE had to swoop in—rapidly and in huge size—to calm markets and save the UK from a pension-led financial crisis. If the same were to happen in the periphery, would the ECB be able to move as quickly? Periphery banks, which hold peripheral notes as high quality assets, will certainly hope the ECB can recreate the BoE’s actions if need be. While the ECB has the TPI, the instrument comes with rules—e.g., compliance with EU fiscal framework, fiscal sustainability, and sound macroeconomic policies. What if Italy, for example, does not meet the standards set by the EU? The rumblings coming out of the country do not point toward a leadership ready to kowtow to Brussels’ demands. Should we see peripheral spreads widen and Italy push ahead with populist “fiscally irresponsible” (in EU eyes) policies, we could easily end up with a debt crisis of a far greater scale than the UK panic last year. This would see the euro tumble, borrowing costs jump higher, and, at worst, bring EU cohesion back under intense pressure.

Chart 2: Italian/German 10y yield spread will be as important a macro indicator as ever in 2023 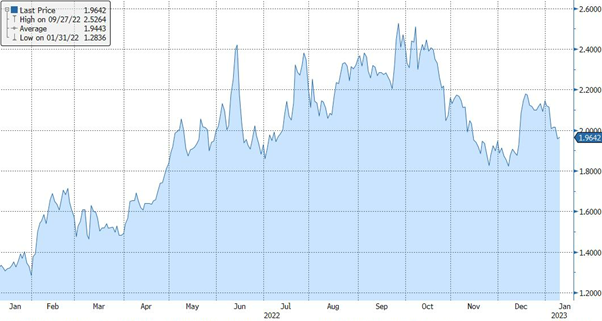 The issues are not too different in the UK either: core inflation remains stubbornly high and labour markets are very tight. The difference here is the reaction from the central bank. Where bankers in the US and EU have committed to hiking aggressively, Governor Bailey has pushed caution. Addressing market pricing, Bailey recently commented that terminal rate expectations had climbed too high, in effect limiting it to below 5% with a growing number of market participants expecting something closer to 4%.

The rationale behind Bailey’s caution is not without merit; the housing market is central to the UK economy and rising rates have the potential to intensify the pressures of the cost-of-living crisis. Expectations are for a total of 1.4m mortgages to come up for renewal this year, facing markedly higher rates. Buy-to-let mortgages will be included in this number. This will lead to a fall in house prices and an increase in rental rates. Bailey and co. are doing what they can to ease these pressures by hiking less aggressively than their peers. The upshot of this may be a more mildly restrictive rate for a longer period, leaving the UK with an inflation overshoot for longer than others. While this may make living conditions more manageable, longer lasting inflation and lower nominal rates could spell disaster for the pound.

The macro environment for 2023 is finely balanced with two-way risk back on the table, leaving much for risk managers to keep track. Those with a robust hedging strategy and the ability to act quickly within changing environments will separate themselves from the pack as the year progresses.