Is it Time to Prepare for Higher Borrowing Costs?

Last week’s Risk Insight focused on the uninterrupted move seen in the bond markets, with global bond yields trending higher and US Treasury yields leading the way, trading over 70bps higher since the start of the year. This spike in yields has a broader impact across the global market space, specifically on emerging markets (EM), as depicted by significant EM currency declines, along with rising implied currency volatilities.

Following the GFC of 2008-2009, there was a massive surge of foreign capital into EM, as investors were attracted to the higher rates in EM economies (relative to the low rates in developed economies). Excessive stimulus measures employed by the US Federal Reserve and the growth in money supply led to substantial spill-over effects as it unleashed a ‘monetary tsunami’, with large short-term capital flows propping up EM currencies. However, in 2013, when the Fed tipped off the market on its asset tapering approach, which led to the ‘taper tantrum shock’ (skyrocketing U.S. bond yields), it triggered a sell-off in developing markets.

As bond yields continue their steady rise, equity markets have been choppy with major indices paring back on growth. The S&P 500 index traded sideways over the last month increasing ~1%. Compare that to the MSCI EM Index (see Chart 1), where the downward trend continues (falling below its 50-day moving average) with a ~-6% decline MoM. 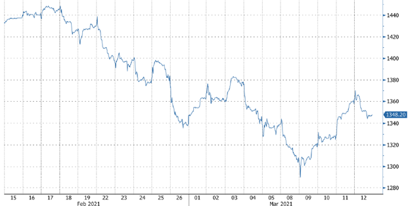 This growing divergence is becoming more apparent, given the inherent systemic issues in developing nations largely driven by the fallout of the pandemic. Labor market recovery in EM, which is less adaptable to modes such as teleworking, trails that of developed markets significantly. Severe labor market shocks are shown by a lagging labour force participation rate (see Chart 2). 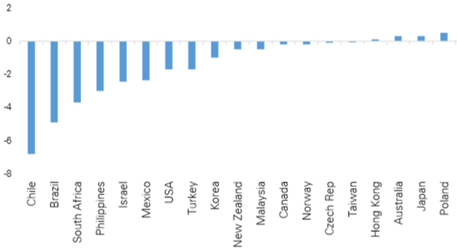 Is is evident that the response to the global pandemic has been asymmetric. EM economies bear limited fiscal power in relation to advanced economies (see Chart 3). Furthermore, the expectations of inflation are relatively subdued given the widening output gap and lack of stimulus, despite near term supply disruptions, which have led to rising food prices in BRIC (Brazil, Russia, India, China) nations.

Support for EM inflation, however, could pick up given the continued rise in commodity prices, which could benefit exporting nations e.g., Russia and Brazil. Couple that with potential cross border flows from expansionary fiscal policy in developed markets and you could see a rise in asset inflation in the months to follow.

Chart 3: Fiscal Measures Employed by G20 Nations as a % of GDP 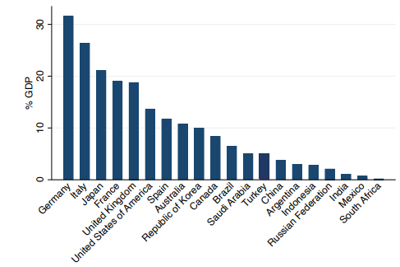 The underlying economics for EM assets tend to perform as a pro-cyclical asset class. Within the global reflation narrative, EM assets positively correlate with the growth spur seen in equities and commodities. However, as witnessed in prior cycles, a run up in real yields can create significant headwinds. As the rise in US rates nears pre-pandemic levels, they are still low (e.g. 5Y high for US 10Y yield is double where it trades today) and lag expected inflation. A gradual increase in rates could well position EM assets to trade higher, but swift moves can cause disruptions.

Over the course of the last month, EM currencies and local bonds experienced their worst performance since the start of the pandemic. The downward trajectory in EM currencies correlates to the broader strength seen in the USD index. As the USD index trended higher, supported by yields, this led to sharp declines in the EM basket of currencies (see Chart 4). 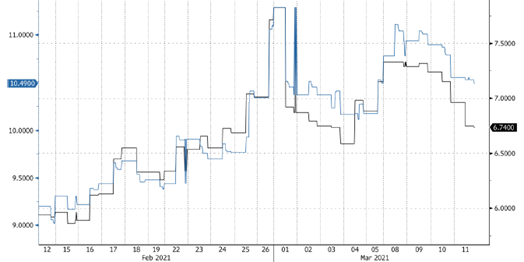 EM FX performance was largely driven by the weakening of LATAM currencies (except Chilean Peso), with the Argentine Peso and Brazilian Real (BRL) weighing heavily on the index with double digit declines (see Chart 6). Weakness in the BRL is exacerbated by political uncertainty (widely divided Senate), particularly on the lack of progress for the policy reform agenda. The market is pricing in steep rate hikes over the course of the next year (~375bps) reflecting the high uncertainty, along with the potential for disruption if not materialized. Overall, the majority of LATAM currencies have been affected by the recent selloff in US rates, bearing additional pressure from political risk in the region and weaker fiscal dynamics.

In an earlier article published on ‘Inflation: Gone but Not Forgotten’, we touched on the asynchronous global recovery with vaccinations occurring at differing speeds and levels of effectiveness, widening the gap between nations, and placing further pressure on EM currencies.

Asia and Africa currently trail the global average, with South America just in-line (see Chart 7). Certain nations, such as Chile and China, are well ahead of their regions on the vaccination front and are also the top EM FX performers (see Chart 6). Chile’s robust macroeconomic framework, strong vaccination rollout and support from rising copper prices (Chile is the largest global exporter of copper) led to a significant appreciation of its currency. Additionally, China’s success on its vaccination program and its significant economic recovery, with exports rebounding 60% YoY, contributed to the strength of its currency. 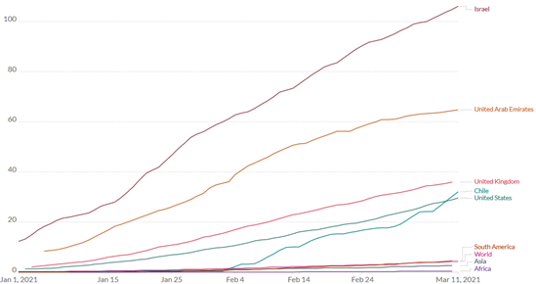 Source: Official data collated by Our World in Data

With broader selloffs in EM currencies, accompanied by rising volatilities, it is important to continue to monitor yields and be cognizant of spikes, which could have a drastic impact on developing markets.

The Fed remains on the side lines for now, with no indication of tapering its asset purchases anytime soon. However, if the market continues to push up yields higher at the same pace seen in recent weeks, yield curve control measures could be a useful instrument in the Fed’s toolkit.