Is it Time to Prepare for Higher Borrowing Costs?

Bond yields remain a hot topic, particularly the US 10 year, which hit a new cycle high of 1.7526% last week. To put this into perspective, the US Government was able to borrow for 10 years at a touch over 0.5% back in August 2020 and still at 0.72% in November 2020. We now find ourselves asking what has changed, and why is the US Government suddenly having to pay more than double the rate it paid for 10-year bonds less than four months ago? 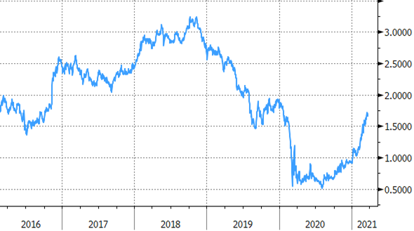 As is often the case, the rise in yields is the result of numerous factors:

A couple of important points to note here… Firstly, it is not just the US where yields are starting to rise. The story is very similar across the developed world amid expectations of a global economic recovery, helped by optimism surrounding various COVID vaccines. However, what is also interesting to note is the difference in how central banks are reacting.

Two weeks ago, the European Central Bank (ECB) stepped up in asset purchases in an attempt to curb the rising cost of borrowing. Whilst not entirely surprising, it was a clear signal that the ECB is not willing to tolerate higher rates at this stage. In contrast, both the Federal Reserve and the Bank of England kept their policies unchanged during meetings last week (as expected). The message from the Fed was that the rise in longer term yields is not surprising, and it reflects expectations of a recovery in the coming years. In the short term, their intention is to keep the Fed funds rate unchanged for the remainder of 2021 and 2022, and they see the recent uptick in inflation as the result of several temporary influences. However, it raises the question over whether this will be enough to keep longer term rates suppressed or whether we will continue to see an undesired steepening of the curve (see our publication from the start of 2021 and the market-melt-up scenario).

What does this mean for FX?

Generally speaking, expectations of higher interest rates are usually positive for the currency in question (i.e. it makes the currency more attractive to hold). However, this only rings true if inflationary expectations are stable. If the primary drive for raising interest rates is to temper the risk of ‘out of control’ inflation, real returns could end up being lower than envisaged.

At this stage, the dollar appears to be benefiting slightly from expectations of higher rates while the euro has been a little softer in recent weeks. That said, the fact that yields are generally rising across the developed world means that one currency is not dramatically favoured over another (at this stage).

Where we are seeing a notable change is in hedging costs, particularly in longer tenors. For example, a dollar fund hedging euro assets has seen the positive carry available when using a 5 year forward rise from 106 annualised basis points at the start of 2021 to 148 basis points today. While it is not the 300+ basis points that was on offer back in 2018, it is a notable increase, nonetheless.

What does this mean for interest rate hedging?

We have seen a notable uptick in the number of clients asking us about hedging interest rate exposures this year. The duration of these exposures is often longer dated than the hedging programs we run to manage FX risk; hence the changing market environment is all the more important. Since the beginning of the year, we have seen the 10-year USD swap rate rise from 95 bps to 166 bps, with cap prices rising accordingly. Fortunately, this is still relatively low by historical standards, but nonetheless, clients should be aware that market dynamics are changing.