A sterling start to Spring

On April 21st, the Bank of Canada (BoC) became the first major central bank to noticeably reduce its pandemic related asset purchases, a clear example of quantitative easing (QE). At the bank’s annual Monetary Policy meeting, it announced a reduction of its weekly purchases of Government of Canada Bonds by 25% from $4 billion to $3 billion.

The BoC stated that “this (negative) adjustment to the amount of incremental stimulus being added each week reflects the progress made in the economic recovery”, although “the recovery remains highly dependent on the evolution of the pandemic and the pace of vaccinations.” 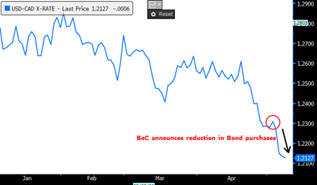 Only a day later, on April 22nd, in stark contrast with the Bank of Canada, the ECB affirmed its commitment to the €1.85 trillion asset purchase, the Pandemic Emergency Purchase Programme (PEPP) by March 2022. Additionally, in light of what the Governing Council members seemed to consider as underwhelming economic and inflation incoming data, the ECB announced that: “the Governing Council expects purchases under the PEPP over the current quarter to continue to be conducted at a significantly higher pace than during the first months of the year.”

Then on April 28th, the US Federal Reserve (Fed) chose to keep its bonds purchases at $120 billion a month, despite one of the fastest and most effective vaccination rollouts globally and healthy signs of a recovery marked by an impressive rise in the price of equities (Dow Jones up 13% YTD) and commodities.

During the press conference, Chair Jerome Powell was once again unequivocal in underlining that it is not “time to start talking about tapering.”

Since then, both the Bank of England and the Reserve Bank of Australia have conducted their monetary policy meetings (both in early May), with neither striking a tone as accommodative as the Fed. They have simply remained committed to the schedule of their previously announced asset purchase programs (as had the Reserve Bank of New Zealand in mid-April).

At this juncture, the Fed, along with the ECB, are the major central banks with the most accommodative language and stance. However, once the strength of the recovery and economic data in the US are accounted for - compared to the Eurozone - the Fed clearly appears to be the most accommodating. This means that the Fed is comfortable - at least for now - to let growth take hold, even with the risk of inflation overshooting, before it changes its signal.

It is important to note that the Fed’s asset purchase program has a very important and distinctive feature when compared to most other central banks - the Fed’s asset purchase program is open-ended. The ECB, Bank of England, Reserve Bank of Australia and the Reserve Bank of New Zealand all have committed themselves to quantitative easings that have expiry dates, as shown in the table below.

What this means, is that all other major central banks have already communicated their tapering via the design of their asset purchase program from the onset. The only one that has not done so, the Bank of Canada, took the initiative of sending a strong signal to pre-empt the effects of reducing a prolonged accommodative policy with no end in sight.

The cost of the “exit option”

Historically, ending an accommodative monetary policy has always been a delicate exercise. It requires balancing a market accustomed to the “extra help” versus the necessity of taming the systemic risks that a prolonged easing policy can create, particularly that of leverage (often undetected) which comes in many forms.

The fact that a central bank announces its quantitative easing with an expiration date, is an astute way of reducing these exit costs, as it anchors expectation around an end-date. But the Fed does not have this option available and, as a result, may find itself in an even more complex situation when looking to reduce quantitative easing.

In the latest episode of market weakness, the mere mention of raising interest rates by Secretary Yellen on May 4th, and the subsequent rally just as she retracted and clarified her comments, is another confirmation of how accustomed markets have become to the Fed’s accommodative stance, underlining how exiting can be a difficult task. Any talk of tapering since December has promptly caused an equity market sell-off or weakness. 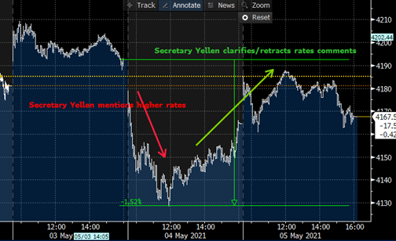 In our opinion, the Fed’s quantitative easing exit cost – as measured by a potential risk-off and market correction - is high when compared to other central banks, and it keeps increasing as the Fed insists on very accommodative language, while the economic data improves and inflation data points higher.

The Fed’s positioning versus other central banks has a number of important ramifications, which must be considered from both risk and investment perspectives:

1. Should the Fed continue the “let’s not talk about tapering” narrative, as other central banks keep steady on their programs, the US dollar could see further weakening against other major developed market currencies. This trend already seems to be somewhat visible. 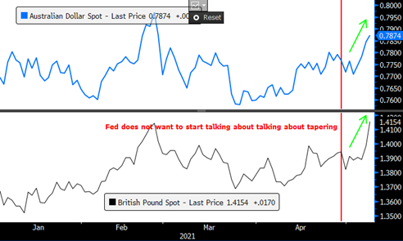 2. As time passes and the Fed further postpones any modification to its language / approach for the reduction of QE; market expectations will be further anchored. From a game theory perspective, this simply reduces the Fed’s flexibility and will likely increase the risks that a change in its accommodative policy will create.

A sell-off in risk assets and a disorderly jump in longer dated interest rates can put pressure on parts of the market that are highly levered, with the worst-case scenario being the materialization of systematic risk. (See our piece dated March 9th, 2021: “A Beautiful Rates Rise”)

It is recommended to keep a keen eye on the evolution of Fed rhetoric, and in absence of it, be prepared for potential short to mid-term weakness in the US Dollar especially as developed market vaccination rollouts and recoveries catch-up with the US. It is also wise to be prepared in the mid to long-term (6-18 months) for the risks associated with a disorderly rise in interest rates, when the Fed will have to review its stance if the reality ‘on the ground’ keeps improving.