A Sterling start to Spring

Since the beginning of the year, Sterling has been the third best performing currency in the G10, gaining 4.0% against the dollar. Only the oil driven Canadian dollar (+5.87%) and Norwegian Krone (+4.45%) have fared better. This week we take a closer look at the reasons behind Sterling’s stellar performance and consider whether the current bull run is likely to continue in the months ahead.

There are a number of factors contributing to Sterling’s stand out performance this year, but none more so than the sharp drop in COVID cases and the success of the vaccine roll out. Despite the government’s gradual easing of lockdown restrictions, both infection and death rates have remained relatively steady and, consequently, the expectation that the UK will return to a more ‘normal’ way of life by the end June remains very much alive. Looking forward, with almost 37 million people in the UK having received at least one dose of the vaccine and over 20 million having had two doses, the UK looks to be in good shape.

From an economic perspective, UK GDP is expected to rebound sharply in the coming quarters with the most recent Bank of England projections pointing towards a return to pre-pandemic levels in Q42020. Understandably, Governor Andrew Bailey was relatively cautious about the recovery going forward, balancing what he described as “very good news” with the acknowledgement that there are still risks on the horizon. With inflationary pressures picking up amid increased demand for goods and services (coupled with issues on the supply side), there is increasing justification for tighter monetary policy going forward, potentially in the form of higher interest rates.

While the Federal Reserve faces a similar dilemma, the market is starting to view the Bank of England as the most likely to ‘blink first’ in the standoff with inflation. The market is now pricing in 15 basis points worth of hikes from the Bank of England by September 2022, versus 12 basis points of hikes from the Federal Reserve over the same period. As such, we have seen a slight narrowing of the interest rate differential between the pound and the dollar in the FX forward market, which in turn is making the pound more attractive (relatively speaking).

The big question going forward is whether Sterling can continue its recent advance or whether we are likely to see it run out of steam. As previously mentioned, there are plenty of reasons to be optimistic, but we are seeing an increasing number of reasons for being cautious.

First and foremost is the growing threat of the Indian virus variant, B.1.671.2, which is responsible for an increasing number of new cases in pockets of the UK. While its arguably too early to draw any firm conclusions, the government is under increasing pressure to delay an end to all lockdown restrictions by 21st June.

Any such set back would certainly put the brakes on the economic recovery and reduce the probability of a rate hike from the Bank of England in the short term. Consequently, we would expect the pound to come under pressure.

A second reason to be cautious is the fact that the pound is once again approaching multi-year highs against the dollar. Back in February 2021, the rally in GBPUSD stalled at $1.4237, just ahead of the $1.4350/75 area highs that we saw back in January and April 2018. This coincides with what most models deem to be ‘fair value’ for GBPUSD under the law of purchasing power parity. Clearly it is not beyond the realms of possibility that we could see the pound move into ‘over valued’ territory, but it seems difficult to justify, all things considered. 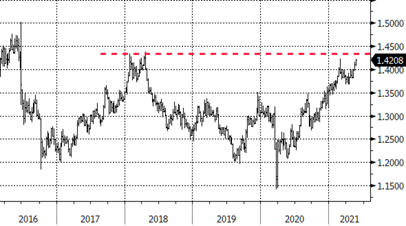 A third point for consideration is market positioning. The latest data from CFTC shows that the market is once again ‘net long’ Sterling (currently to the tune of 28,000 contracts). While this clearly shows a demand for the pound, regular readers will know that we see this as a contrarian indicator and view it as a risk that the pound is set to come under pressure when these positions are unwound (as they inevitably do). 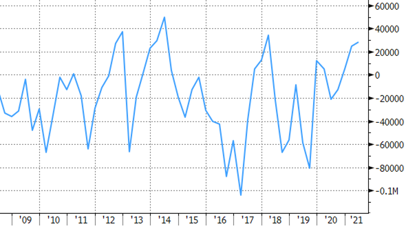 To conclude, it is important to remember that there are two sides to a currency pair, and when looking at GBPUSD, we should not ignore the dollar side of the equation. As previously discussed in this report, we view the timing of the Fed’s action with regards to shifting monetary policy as being the key driver going forward, and our views there have not changed. Moreover, the risks posed by the Indian variant simply reaffirm our concerns about the downside risks for GBPUSD in the short term.