The last time inflation was an issue for the private equity industry, Michael Milken was backing LBOs with ‘highly confident’ letters, and the most famous private equity deal of all time (KKR’s $31 billion takeover of RJR Nabisco), which was later immortalized in ‘Barbarians at the Gate’, had just been completed.

The 1980’s were an important decade in the history of the private equity industry - one in which many of today’s leading firms, such as Bain Capital, the Carlyle Group and Blackstone Group, were founded. Ever since, declining inflation and interest rates have proved a tailwind for the industry, lowering financing costs and pushing multiples higher. 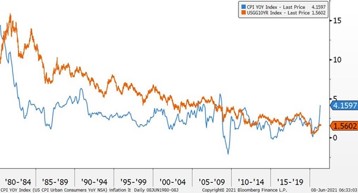 However, there is a growing concern that, for the first time in over three decades, inflation may be back in a meaningful way. In a Q1-2021 investor call in April, Blackstone COO Jon Gray called inflation ‘the major risk that’s out there today.’ A question remains over whether this current inflationary spike is a ‘transitory’ phenomenon caused by the post-COVID economic re-opening, or a longer-term regime shift underpinned by monetary and fiscal largesse. While the answer to this question is impossible to know with certainty (I am inclined to believe the latter), it is worth exploring the potential impacts of inflation on the private equity model. Validus is currently working with numerous clients to identify and assess inflation risk at both the fund and portfolio company levels.

As private equity and leverage often go hand in hand (and have done since Milken’s heyday at Drexel), the cost of debt is an important factor in private equity performance. As financing costs have declined since the 1980’s, private equity investors have proved ever more sophisticated at incorporating leverage into deals – with the use of debt expanding from the operating company, to holding companies, and then to fund-level and management company debt.

Should inflation continue to push higher, this will lead to higher borrowing costs, which, in the absence of suitable hedging, will drag down fund returns. We have seen a notably uptick in client inquires around requesting advice specific to identifying, quantifying, and designing hedging solutions for those with exposure to interest rate fluctuations.

In addition to the cost of debt, inflation also impacts valuations. In the public markets, there is heuristic known as the ‘Rule of 21’ – that the market’s P/E multiple and CPI inflation should add up to 21 (note: by that measure, the market looks slightly overvalued today, with a P/E multiple of 18x and inflation just north of 4%).

In the private markets, we can perhaps think of a similar ‘Rule of 12’. For example, back in the mid-2000’s, with inflation tracking around 3-4%, EBITDA multiples were around 8x. As we entered the 2010’s, with inflation falling to the official target of 2% in the aftermath of the Global Financial Crisis, multiples pushed overs the 10x level. Then, in the latter part of the last decade, as inflation approached zero, multiples have reached the 12x level.

Such rules of thumb are, at best, a rough indicator. However, for PE managers looking to invest at today’s multiples, it is worth considering the implications of a return to mid-single digit inflation, and what this would mean for valuations going forward.

If inflation leads to multiple contraction, then earnings growth potential will become an even more important priority when selecting investment opportunities. Some sectors and companies will do better than others in a shift towards an inflationary economic backdrop.

Pricing power will be critical - on average, B2B businesses will be better positioned than B2C businesses forced to pass on price rises to the end consumer. Labour cost inflation, in particular, will likely become increasingly difficult to manage, so businesses which are well-placed to scale should outperform those that are dependent on growing their workforce in line with revenue. Business models dependent on high long-term growth projections (i.e., young, capital intensive - and often unprofitable - technology businesses) will see valuations contract as the discounted value of long-term profits is compressed…the NASDAQ dropped over a thousand points following April’s CPI release for a reason!

Running a business in an inflationary environment is quite different from operating in stable / low inflation conditions. After investment opportunities are found, and closed, the importance of ‘forgotten’ – or at least underappreciated - skill sets like efficiently managing inventory, accounts receivable and payable, and cash will grow. Effective working capital management could make the difference between survival and failure in a high-inflation world. PE sponsors will need to ensure that their management teams are properly incentivized to hone and apply these skills to maximize investment returns.

It is no coincidence that the typical hurdle rate we see in the market today (~8%) was established back in the 1980’s. 8% was roughly what you could get on a 10-year government bond back then and represented the ‘risk-free’ expected long-term return of investors.

As this risk-free rate has declined, private equity managers have had success in reducing this hurdle rate (e.g., to 6%) or, in some cases, avoiding it altogether. Unsurprisingly, this trend is not particularly popular amongst LP’s. The Institutional Limited Partners Association (ILPA), for example, recommends that distribution waterfalls incorporate a preferred return before GPs collect carried interest.

Should inflation return, and push yields higher, we would likely see a slowing down, and possibly a reversal, of the trend towards lower hurdle rates in the private equity world.

In a letter to the Financial Times published this week, former Bank of England Governor Mervyn King writes: ‘One does not have to be confident that inflation will rise to be concerned about the risk that it might’. When it comes to private equity, the beginning of a new inflationary era would certainly bring challenges to an industry which has thrived during decades of low / stable inflation and interest rates. While it is too early to know whether we are about to enter a new age of inflation, it is certainly not too early to begin to prepare for it.