Hawkish Fed steps on the gas

After a good result for England’s national football team on Sunday, alongside the conclusion of the G7 summit in Cornwall, media attention quickly shifted to Boris Johnson’s scheduled press conference yesterday evening. By the time the announcement came, everyone was expecting an extension to the current lockdown measures. The only questions were how long restrictions would remain in place and whether there would be any concessions for planned events, such as weddings. One could argue that the PM scored an own goal, with a number of Tory rebels strongly criticising his latest move, but a cautious approach to exiting lockdown was almost inevitable.

Last month, I wrote a piece setting out three reasons for being cautious about the British pound. My primary concern at the time was the threat of the delta variant, which has indeed resulted in lockdown being extended. However, the impact on sterling has been negligible (so far anyway), which may be slightly surprising but is almost certainly a result of three factors: 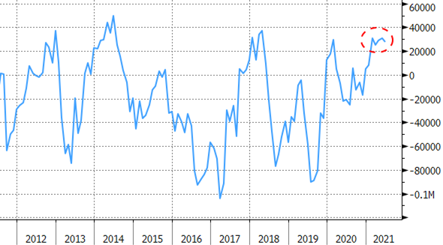 Secondly, we looked at momentum, noting GBPUSD had stalled ahead of its 2018 high of 1.4380 and was starting to look ‘overbought’. After a period of consolidation, the overbought nature of GBP/ USD has eased somewhat, but that fact that we have not been able to break any higher gives cause for concern. 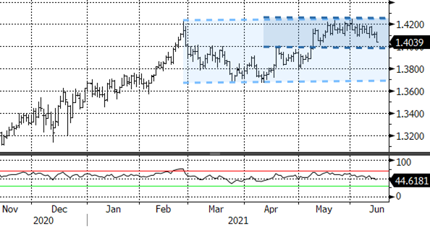 Instead, a renewed risk facing the UK economy (and the pound) is the potential for a trade war between Britain and the EU over the application of the Northern Ireland protocol. Speaking to Sky News at the G7 meeting, Boris Johnson said he will do “whatever it takes” to protect the integrity of the UK and that he is prepared to invoke Article 16 if necessary. For now, discussions will continue, but at the very least, it is a far cry from the amicable separation we all hoped for when the trade detail was announced back in December.

So, in answer to the question over whether we should be more optimistic about sterling, given how well it has held up despite the recent bad news, our overall bias remains unchanged. Like the football, I feel a lot more positive about England’s chances following Sunday’s victory, but I am reminded that we have only played one match and there is a long way to go. The same applies to sterling, where there continues to be further challenges ahead.

In the short term, one catalyst that could trigger a breakout in GBPUSD is the FOMC meeting scheduled for tomorrow. Clearly Powell is not expected to announce any changes to policy just yet, but any shift in the Fed’s forward guidance could increase volatility in the dollar.