By now, I’m sure everyone is all too aware of rising energy prices, particularly those of us in the UK. International oil benchmarks have been rising steadily over the past 18 months and Brent Crude has taken another step higher in the last week, rising above $80 per barrel for the first time since March 2015. However, it’s the rally in electricity and natural gas prices that have grabbed the headlines in the mainstream media.

Electricity prices have risen sharply too in recent weeks following a fire at the National Grid site in Sellindge, Kent on 15th September, resulting in imports of electricity generated in France expected to be cut by 50% until early 2022.

In turn, this is driving up demand for gas as an alternative power source. When coupled with supplies from Russia drying up in the wake of increased demand from Asia and several platforms in the North Sea being closed for maintenance that was delayed by the Pandemic, it’s no surprise to see prices rising sharply.

Despite a price cap, ultimately, the likelihood is that we’ll all end up enduring higher prices in the months ahead which will put further upward pressure on the various inflation metrics. But rather than make this another piece about inflation and how central banks might respond with changes in monetary policy, for us as risk managers, there is another valuable lesson we can take from the current situation and that is the importance of an effective risk management policy.

In recent weeks, seven UK energy firms have gone bust and many more are thought to be at risk. So far, the government has said that it won’t bail out failing suppliers despite the knock-on impact to the consumer. Given the historic volatility in gas prices, I’m almost certain that all had some hedging in place, however, whether the policy was fit for purpose is questionable.

Currently, energy firms are supplying customers at a fixed (or capped) price while the price of the underlying product is floating. When the floating price rises above the fixed (or capped) price, the supplier is forced to deliver product at a loss which is clearly unsustainable over the long term. Had the supplier hedged this risk, they could have ensured they were able to fulfil their obligations in a profitable manner. 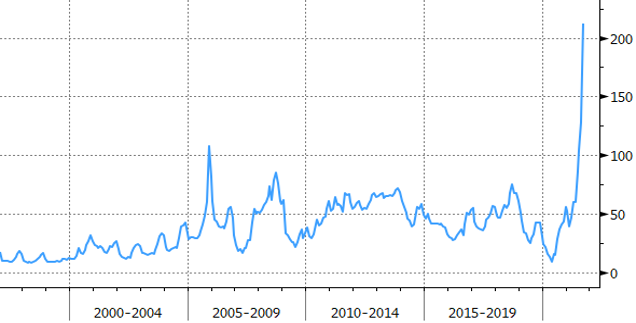 One size doesn’t fit all

Looking at the chart above, the current situation is clearly an extreme example of the importance of effective risk management.

The same principle applies in FX or Interest Rates. A fund with investments held in currencies other than the base currency of the fund needs to ensure a suitable hedging policy is in place to protect the fund’s NAV. Likewise, a company with floating rate debt should consider hedging its exposure to a rise in interest rates to ensure that its interest expense doesn’t wipe out its operating profit.

Tail risks on the rise

Gas prices have always been very volatile, considerably higher than FX or Interest Rates, but tail risk events seem to be happening with increasing occurrence in all markets. Thinking back to March last year, sterling fell almost 14% in seven days when markets panicked about COVID. Prior to that, it was the UK referendum in 2016 and before that the European debt crisis.

Looking forward, it is anyone’s guess as to what the next black swan event might be but with inflation looking less transitionary and more of a structural change, higher interest rates are looking increasingly inevitable. As risk managers, our job is not to predict when something might happen, but to be prepared for when it does happen.