The mirror of the error – The road ahead for the Fed

Over the past twelve months, central banks across the globe have been raising interest rates to combat rampant inflation. Last week, we saw more of the same, with the Federal Reserve, Bank of England and the European Central Bank all confirming to market expectations and hiking their respective base rates by 50bps. However, there were some notable differences in the accompanying statements / publications which poses the question, will we see central banks’ policy diverge in 2023? 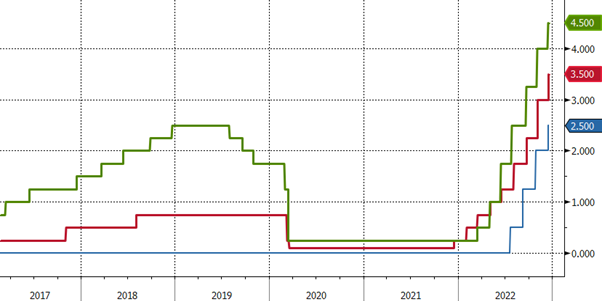 The Federal Reserve has been relatively consistent in its messaging in recent months and following Wednesday’s decision to raise rates by 50 basis points, continued to signal that “ongoing” increases are needed to combat inflation. This was supported by the dot plot which showed a terminal rate of 5.1% in 2023. The committee’s concern is that financial conditions have refused to tighten sufficiently, while an extremely tight labour market will further fuel price pressures in the months ahead. This all seems perfectly logical, however, the market doesn’t believe it. Instead, Fed Futures are suggesting two further 25bps hikes by the summer, before the committee then starts to cut rates in Q4.

Meanwhile, the Bank of England also voted to raise rates by 50 basis points, taking the base rate to 3.5%. Once again, the surprise came in the accompanying material where the minutes showed a split vote with two members (Tenreyro and Dhingra) voting for no change, six members voting for +50bps hike and Catherine Mann voting to raise rates by 75bps. Sterling came under immediate pressure following the news, as traders priced in a reduced likelihood of significantly tighter policy in the months ahead, assuming that the split vote will make it harder to vote through further tightening in the months ahead.

However, it was the European Central Bank who delivered the biggest shock. The 50-basis-point hike to 2.00% was as expected, but the accompanying statement was deemed hawkish by most commentators. We saw a substantial upward revision to the inflation outlook, with new forecasts showing prices rising comfortably above the 2% target, together with the message that rates will have to rise “significantly further” at a “steady pace” to be “sufficiently restrictive” to deal with inflation that “remains far too high”. As a result, we saw an immediate repricing of the OIS curve, taking the implied rate for Q3 2023 to almost 3.25% and a rally in the euro against both the pound and the dollar.

So, what can we expect as we head into 2023? Could the Fed, and potentially the BoE, stop tightening policy, while the ECB continues to raise rates? If so, what does this mean for the currency?

Simply put, it is entirely possible that the Fed, BoE and ECB diverge in their stances on monetary policy. Given that the ECB was last to start raising rates, it seems logical that it will be the last to stop, and any pause could likely come after the Fed starts easing again. This is what is currently priced in, so assuming everything plays out as expected, we shouldn’t expect to see too much volatility in the currency markets.

What is more interesting is the fact that the Fed Funds Futures are pricing in notably less than the Fed’s message that rates are still likely to go higher (see chart below). The market currently sees US rates around 4.5% by the end of 2023, whereas the Fed’s dot plot has rates at 5.1%. Given the recent drop in CPI and disappointing retail sales numbers, it’s entirely possible that the Fed may not need to be quite as aggressive as previously thought. However, if the market is wrong and the Fed sticks to its guns, there is plenty of scope for a stronger dollar as a result.

One thing is for sure – there is significant two-way risk in both FX and rates as we head into 2023. With implied volatility coming lower in recent months, now is an opportune time to review hedging strategies and ensure risks are contained within pre-agreed policy limits.