Loonie in the Spotlight

Back in January, when everyone was making their market predictions for the year ahead, there was an overwhelming bias towards a weaker US dollar. That month, a report from Bloomberg reiterated the sentiment, as 95% of investment banks surveyed expected the dollar to weaken during 2021. A little over three months in and the dollar is 1.8% higher on a trade weighted basis, helped by a 2.1% gain versus the euro. According to the latest figures, there is still a marginal bias towards a weaker dollar, but far less so than we saw back in January. As such, we find ourselves asking “what has changed?” as we reconsider the factors that may have a positive impact on the greenback in the coming months.

From a short-term perspective, momentum is arguably the biggest influence on expectations for future spot rates. If a currency pair has been trending in one direction, it is understandable that forecasters will have a natural bias towards expectations of that trend continuing. Looking at Chart 1 below, EURUSD has been trading in a descending trend channel since the beginning of the year. As a result, someone who had previously expected the dollar to continue depreciating into 2021 (as it had in the final months of 2020) may well have lost confidence, consequently switching their view. 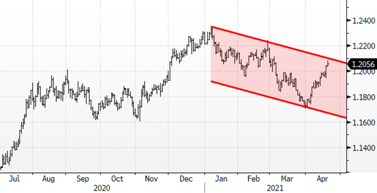 Given the rally since the beginning of April, momentum in the very short-term has been relatively bullish. If we start to see a break back above 1.21, hence reversing the downward channel trend highlighted in red, we suspect those calling for a weaker dollar will start to become more vocal once again.

Recent data suggests that the US economy is recovering faster than its major peers, thus it seems highly probable that the Federal Reserve will be the first of the major central banks to start tightening monetary policy. In the short-term, Jerome Powell remains adamant that the Fed is willing to tolerate higher inflation, as long as it is expected to be temporary. Just last week he noted that most Fed members do not see rates rising until 2024. The market is significantly more hawkish and is pricing in 2-3 rate hikes for 2023, and as previously highlighted, the 10-year Treasury Yield has been rising significantly in recent months. Ultimately, expectations of higher rates tend to have a positive impact on a currency.

Deterioration in the Eurozone Economy

Last year, the Eurozone appeared to suffer far less beyond the first wave of the pandemic than the US. This fuelled expectation of a speedy economic recovery, and we saw the single currency outperform the greenback in 2020 (on expectations that US rates would remain lower for longer). However, delays to the vaccination program in the Eurozone and now concerns over a possible third wave have delayed expectations of an economic rebound. Added to that, the resulting political uncertainty across the continent is now weighing heavy on the euro.

Our third macro scenario, which we outlined in our 2021 outlook, centred around the risk of higher inflation and nominal rates rising across the medium – long end of the curve. Back in January, we attributed a 40% probability to this scenario (equally weighted with Benign Reflation). This outcome is now looking increasingly likely, with inflation running at 2.6%, asset prices rising sharply and the 10-year Treasury yield advancing towards 2%. Consequently, we now attribute a 60% probability to this scenario, at the expense of the ‘Benign Reflation’ scenario, to which we now assign a 40% probability.

As highlighted in our report at the beginning of the year, what happens next for the dollar is likely to be heavily dependent upon both the actions of the Fed and the timing of those actions. Our overall view remains that in the short-term, as real yields continue to rise, we expect the dollar to benefit, particularly if volatility starts to increase. A move back towards 1.1500 in EURUSD certainly does not look beyond the realms of possibility.

However, despite Powell’s acknowledgement that 10-year yields are a direct reflection of how well the US economy is faring, it seems unlikely that the Fed will be willing to tolerate a tightening in financial conditions for fear of it jeopardising the recovery. As such, we see an increasing likelihood of the Fed introducing yield curve control to dampen longer term rates. As the market starts to price in expectations of further easing, the dollar is likely to come under pressure, and hence we expect the dollar to weaken again as we head into the back end of the year.