Forecast: Sunny Markets with a Risk of Delta Clouds

Hawkish Fed steps on the gas

As of late, major FX and interest rate markets have been largely trading in a rangebound fashion with volatility levels trending near annual lows. Last week’s Fed meeting, and Powell’s speech (which was surprisingly hawkish), was a highly anticipated event, as the market sought further direction from the Fed on the economic recovery front, inflationary guidelines, and tapering activity. In what was a fairly significant shift in tone, thirteen (out of eighteen) Fed members opted for at least 1 hike by the end of 2023 (compared to 7 at the prior meeting), resulting in a spike in market volatility and a broader sell off in US Treasuries, marking price action not seen since late February 2021.

In line with prior meetings, the Fed left its monthly bond purchasing program unchanged at $120 billion and continued to highlight its goal towards maximum employment and an average inflation targeting (AIT) framework (that resides above the 2% threshold). Undoubtedly, recent CPI figures, which exceeded consensus estimates for 3 months straight, pressured the Fed to raise its 2021 inflation forecast (by a full percentage point to 3.4%).

Despite the increase, the Fed remains in the camp that inflationary pressures continue to be transitory and will subside as the economy returns to normal. While it is true that supply chain bottlenecks are partly contributing to the rise in inflation, and that certain components such as the pricing of used cars hovering over 10% YoY growth are unrealistic, whether the market buys into the Feds view is a different story. Needless to say, the pivot in the Fed’s communication was timely, as the market looks to establish new trading ranges in line with central bank bias.

The dollar index has seen a steady decline since March (see Chart 1). However, since the Fed announcement, we have seen a swift reversal as market positioning is set to reverse and the recent build up in net USD shorts is squared off. This renewed momentum in USD is expected to continue in the near term as a hawkish Fed paints a majestic picture of hiking rates faster and sooner. Despite the median consensus placing a rate hike in Q1 of 2023, 7 of the Fed members actually called for a rate hike in 2022 (compared to 3 at the prior meeting), signalling the potential for earlier signs of rate hikes which are not yet priced into the market. This will largely depend on data releases in the months to come, and whether the pickup in employment levels along with sustained inflation prints persist.

Post the Fed’s announcement, US implied inflation (break-even) rates have been declining, with US real yields on the rise, contributing to the increase in USD against a wide basket of currencies. Major currency pairs including EUR, GBP and CAD have weakened against the USD, to levels not seen since late March and early April this year. The hot reflation trade of 2021 seems to bear dwindling support – just look at the significant flattening of the yield curve, with yield spreads between the 5 and 30-year at the lowest point of the year (see Chart 2), indicating a decline in expectations for future inflation. Looking forward, could this signal a diminished outlook on economic growth? Equity markets have come off in the last week, but the Fed seems ready to step in if risk assets get hit too hard. I am skeptical of whether the markets will conform if all that bullishness was simply dialed back. 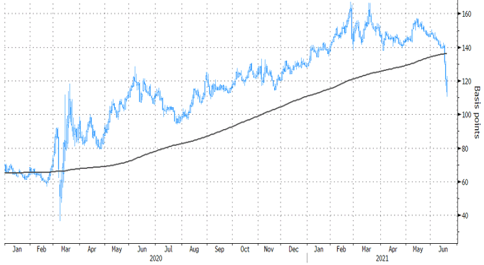 With a signal / discussion on asset tapering now looming at either the Jackson Hole Symposium or the September FOMC, expect market positioning to shift from a bearish USD to a more neutral / bullish stance in the near term. Real rates will lead the way, as the Fed has now revealed its intent on keeping inflation in check. Be wary of aggressive tightening measures however, long-end yields are already starting to pull back (resulting in the flatter curve), as the market remains cautious on risk further out. Going back to the financial crisis of 2007-2008, it took the Fed a number of years to even begin tapering discussions, and they still got it wrong leading to massive sell off in Treasuries (2013 taper tantrum). If the Fed were to act in the coming months, it would mark the quickest it has been in removing accommodation, which could have a residual impact on market sentiment.

With the Fed now moving, other central banks will be closely watched as there is a building impetus for a hawkish reaction and / or a broader discussion on easing stimulus. Norges Bank took the first stance in signaling a potential rate hike in September 2021, whilst at the time, the European Central Bank was rather dovish in its view, noting it was premature to talk about tapering discussions. Keep an eye on the Bank of Canada, Reserve Bank of Australia, and Bank of England as a collective hawkish reaction amongst them could partly reverse the recent currency declines seen and impede the current bout of USD strength.